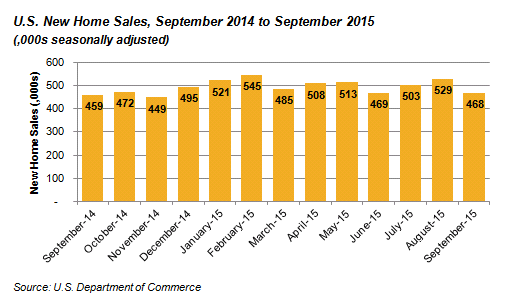 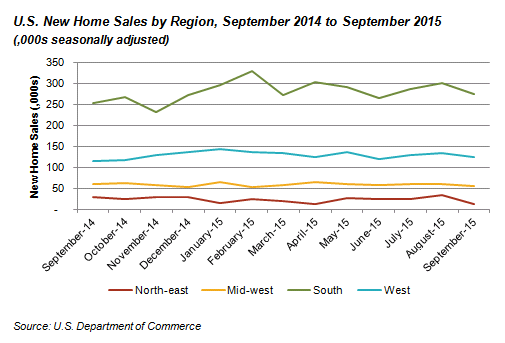 And the months of supply (the ratio of houses for sale to homes sold) increased slightly to 5.8 vs. 5.5 one year ago, which is still below the six-month supply tipping point above which home price appreciation typically begins to taper. 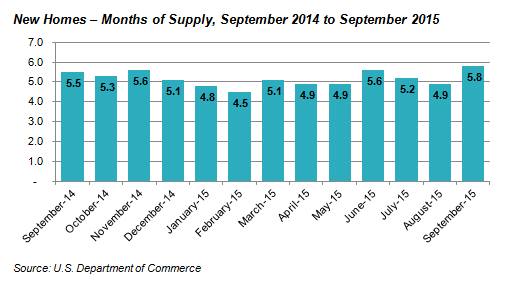 But just as the picture is different depending upon where you look around the country, there is also a “class” war waging across the nation. The number of new homes sold in the U.S. priced $400,000 and above has increased 25% over the past year; however, the pace of new homes sold priced under $400,000 dropped by almost 11% during the same period. This is likely due to the higher hurdles facing lower income households in obtaining mortgage financing, and the fact that builders are focusing on higher value, higher margin new home segments. In addition, land prices and development and construction costs put downward pressure on homebuilder profitability, making the economics of lower priced product much more difficult, particularly in highly sought submarkets.

In part due to the changing mix, the median value of new single-family detached homes in the U.S. is up an impressive 13.5% in September 2015 compared with just one year ago. This compares with CPI increases of just 0.5% during the same period, indicating that new home prices are handily outpacing inflation. The compounded average annual median new home price has been 4.6% since September of 2009.

Interest rates have a significant impact on the affordability of new homes. To illustrate, monthly payments and total term-of-life mortgage costs for a $300,000 new home with a loan amount of $250,000 for 30-year mortgages at different interest rates (including 1.5% property tax and 0.5% PMI) are shown in the table below. Each 100 basis point increase in interest rates on a 30-year mortgage results in an approximately 10% jump in monthly payments. Increasing interest rates puts downward pressure on new home sales as it removes potential buyers, particularly those at the lower end of the income spectrum, from the market.

The good news/bad news for the new home market is that U.S. inflation fell for a second straight month in September according to the Bureau of Labor Statistics (BLS). The good news is that this may well stave off a rate hike by the Fed—the Federal Open Market Committee (FOMC) has a 2% annual inflation rate target and this will help keep new homes more affordable to a larger segment of the market, although the Fed hinted this week that it might raise rates after all in December. The bad news is that deflation could be a signal of a weakening economy, and we all know how important job growth and consumer confidence are to the health of the new home market.