Americans’ love affair with the automobile is legendary, and that relationship largely has resulted in the creation of an urban form characterized notably by low density and sprawl. Today the built environment in our cities reflects substantial land area devoted to auto parking and associated circulation. Recent RCLCO research helps confirm, however, that changing trends in automobile use and ownership have the potential to reshape these urban environments and resulting new construction, particularly as real estate developments see less need for space devoted to parking uses, and the move to transit-rich locations becomes more mainstream.

RCLCO recently conducted a survey of residents in the nation’s 20 largest metropolitan areas to gauge current attitudes toward auto use and ownership.1The survey results show significant continued devotion to the auto—over 60% of all respondents answered affirmatively when asked whether they own and need a personal automobile and could not live without it—but a substantial minority expressed a willingness to consider alternatives to auto ownership, such as relocation to other locations with improved public transit and car sharing.

Not surprisingly, the Gen Ys (born since the early 1980s), with their now well-known urban preferences, show considerable interest in these ideas. From a real estate development perspective, the impact of less auto usage, and by extension less on-site parking, can have a dramatic impact on development costs.

Results from the RCLCO survey indicate that significant generational differences exist in attitudes toward car ownership. For example, Gen Y respondents indicated that they prefer not to own a car at a much greater rate than their counterparts in other generations—32% of responding Gen Ys do not own a car and do not need one, because they use public transit and/or alternative transportation. This is approximately twice the rate for Gen X and over three times the rate for older generations. 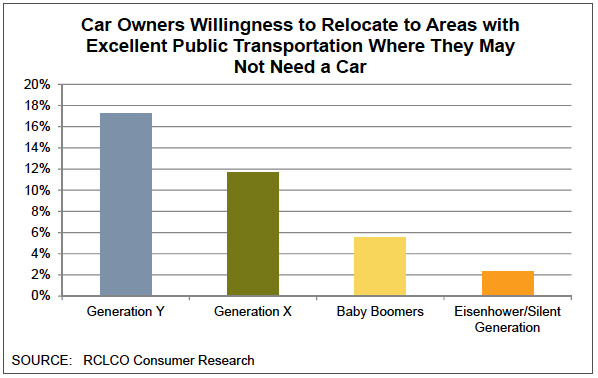 Nearly 20% of Gen Y respondents and 12% of Gen X respondents indicate that they would consider giving up the cars they own, because the cost of ownership is not justified by the amount they use it—about two to three times as likely to do so than members of the Baby Boomer and Eisenhower generations.

As an alternative to personal auto ownership, the younger generations express a much higher inclination than older generations to move to a location better served by transit and also reported that they would consider selling their cars if car sharing were available in the building or neighborhood where they reside. Specifically, members of Gen X and Gen Y are most receptive to giving up their cars in favor of car-sharing programs or neighborhoods better served by transit—about 12% and 17% of respondents, respectively, answered affirmatively to this proposition.

These survey findings about automobile ownership are directly applicable to the real estate marketplace, because Gen Y and Gen X households, especially those in the upper income brackets, comprise the heart of the market for urban, luxury apartments. This makes the findings of the study relevant in sizing the costly parking component of urban development. While a minority of respondents regardless of generation would consider giving up auto ownership, that minority is nevertheless sizable and is concentrated among members of Gen Y, who are now beginning to express their consumer preferences. The real estate industry will need to understand these unique consumer preferences in order to respond to likely product shifts.

In light of these findings, how might the real estate development community begin to anticipate and react to changing trends in personal auto use and ownership?

In summary, changing preferences for automobile ownership among younger generations, especially Gen Ys entering the market in growing numbers, will likely herald profound changes in real estate and land use trends in the coming years, particularly in urban infill locations and those well served by transit.