The sentiment among real estate professionals regarding the economy and real estate markets remains extremely positive. Building upon strong gains beginning in the second half of 2012, the Current Real Estate Market Index (RMI1) for both the U.S. overall and Local/Regional markets posted their highest mark since we began the survey in 2009. Nearly a quarter (24%) of respondents said that the markets were “Significantly Better” than 12 months ago, up from only 5% who reported this level of optimism at the beginning of the year. A full 90% of respondents are firmly in the “Better” category. 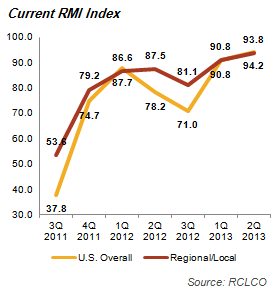 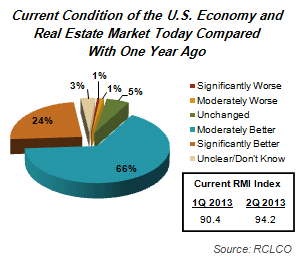 The optimism seen in the RCLCO National Sentiment Survey has been mirrored in the NAHB/Wells Fargo Housing Market Index (HMI), which has seen a similar, albeit less dramatic, increase since 2011. The HMI tracks builder confidence and is calculated in a similar manner to RCLCO’s RMI. The HMI crossed the 50 index mark in June of this year—the last time this index was above 50 was April 2006—and increased even further to 57 in July.

The outlook for the next year remains equally optimistic, with both the U.S. (90.3) and Regional/Local markets (93.5) posting Future RMIs above 90. 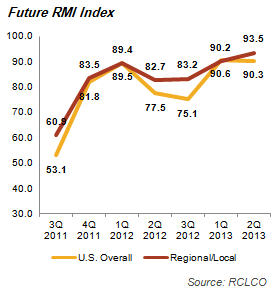 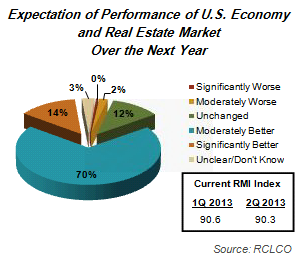 Looking around the country, there is a very high level of confidence in every region, with Current RMI indices all in the 90s. The exception is the Washington-Baltimore area, which experienced a sharp decline in 3Q 2012 leading up to the national election and in response, no doubt, to the uncertainty around that event and sequestration. The confidence level in this area has risen substantially since then, but it still lags behind the other regions.
Participants in nearly every regional market expect to see improving economic and real estate market conditions over the next 12 months.
Sentiment among participants in the Midwest continues to improve as the auto industry bounces back, and there is also unanimous consensus from respondents in the Pacific Northwest, Northern California, and the Southwest that economic and real estate market conditions will be better in the next 12 months. New England is a curious laggard in the group, but still registers at a fairly high level of confidence at 66.7.

Job growth in the U.S. has been steady, but insufficient to make a meaningful dent in the unemployment rate. Nevertheless, the Mid-Year RCLCO National Sentiment Survey results indicate that real estate market participants are convinced that the recovery is durable and will gain momentum in 2013 and beyond, and this bodes well for most sectors of the real estate economy.