Political uncertainly both at home and abroad, a less than stellar job market in the US, gyrating stock markets, and a housing market that continues to be stuck in neutral have all conspired to weaken the RCLCO Real Estate Market Index (RMI)1 in the third quarter of 2011. 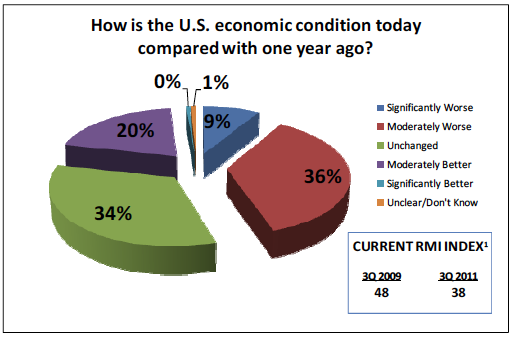 The Current RMI, which measures real estate industry market participants’ sentiments about the current state of the U.S. and various local and region economies and real estate markets, dropped to a value of 38 in the third quarter of 2011. This represents a full 10 point decline from 3Q 2009. Fewer participants believe the US economy and real estate market is “Significantly Worse” today (9%) compared with the previous survey (19%). However, only 20% view the market as any “Better” in Q3 2011, compared with nearly 40% in the previous survey. Nearly 80% of the respondents feel that the US economy is either bumping along the bottom “Unchanged,” or has gotten “Worse.” 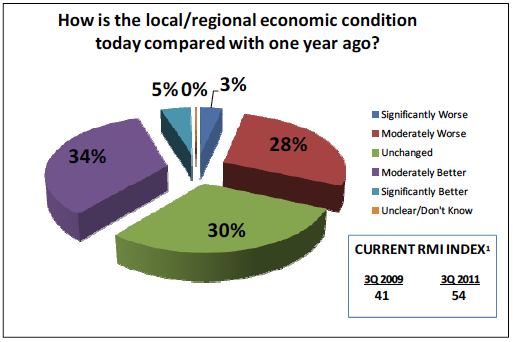 Curiously, respondents to the survey are feeling better about the condition of their local markets compared with the US overall. The Current RMI for Local/Regional Markets stands at 54, a full 16 points higher than for the US and 13 points higher than the previous survey. Nearly 40% of respondents say their local/regional economy is better than a year ago, while only 20% say the US economic condition is better. Still, the majority feel that their Local/Regional Market is either bumping along the bottom unchanged or has gotten worse. A majority (61%) say their Local/Regional Market is unchanged or worse compared with one year ago, which represents a slight improvement over the previous survey, when 68% said it was either unchanged or worse. 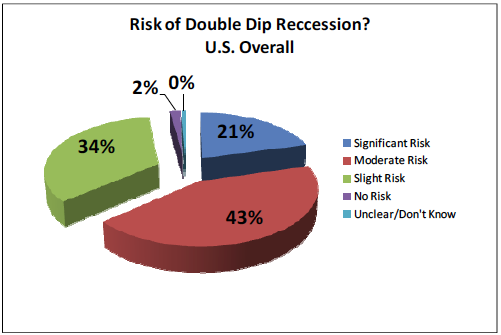 Initially, we thought this dichotomy must be the result of a disproportionate weighting of survey respondents from relatively strong markets, such as Washington, D.C., Boston, Dallas, Houston, etc. However, when we dove deeper into the data, we realized that this was not, in fact, the case, but rather there was a consistent pattern across the country where respondents felt better about their local market compared with the US overall – the Lake Webegon effect (named after Garrison Keillor’s fictional town where “all the women are strong, all the men are good looking, and all the children are above average”). 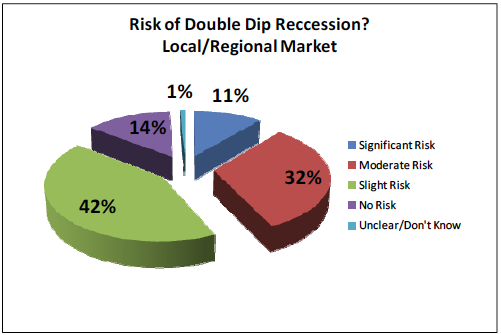 Unease regarding the durability of a recovery is very high among the respondents. Nearly all (98%) believe there is some risk of a double-dip recession in the US, and 85% in their Local/Regional Market. The consensus view is that there is only slight or moderate risk of a double dip recession. Very few are willing to say there is “No Risk” of returning to recession.

There are some significant regional differences in the sentiment regarding the risk of a double dip recession, with 32% reporting “Significant Risk” in the Northeast, but only 15% in the Mountain West.

The Future RMI, which measures real estate industry market participants’ sentiment about the future state of the US and various Local/Region economies and real estate markets over the next 12 months, indicates waning optimism about the speed and durability of the recovery. The Future RMI for the US overall dropped in 3Q 2011 to 53, down from a fairly optimistic 69. Similarly, the Local/Regional Market Future RMI dropped 10 points from 71 to 61, still a relatively good indicator for expectations of recovery, but a significant notch down, indicating expectations that a return to “normal” may take longer than previously anticipated.

For the pessimists among you, it is important to point out that the majority of respondents expect the US overall (66%) and their Local/Regional Markets (58%) to remain either unchanged or get worse over the next year. For those who like to see the proverbial glass half full, take solace in the fact that while a plurality expect the future condition to remain unchanged, more respondents expect both the US and their Local/Regional Markets to get better than expect them to get worse over the next year, and very few (2% – 4%) expect the economy to get significantly worse – of course, barring a double-dip recession?!

Current Conditions by Land Use

Multifamily is clearly leading the pack. Over 30% of respondents to the RCLCO National Real Estate Market Survey in Q3 2011 believe that this sector of the real estate industry is already in “Full Recovery” mode, and another 57% report it is improving. Hospitality is running second in the “Improving” category, followed by Active Adult, Seniors, and Industrial.

In contrast, 36% believe Resort/Second Home is still declining, and another 50% believe it is bumping along the bottom. The vast majority view Land, For-Sale Residential, Office, and Retail as flat or declining. 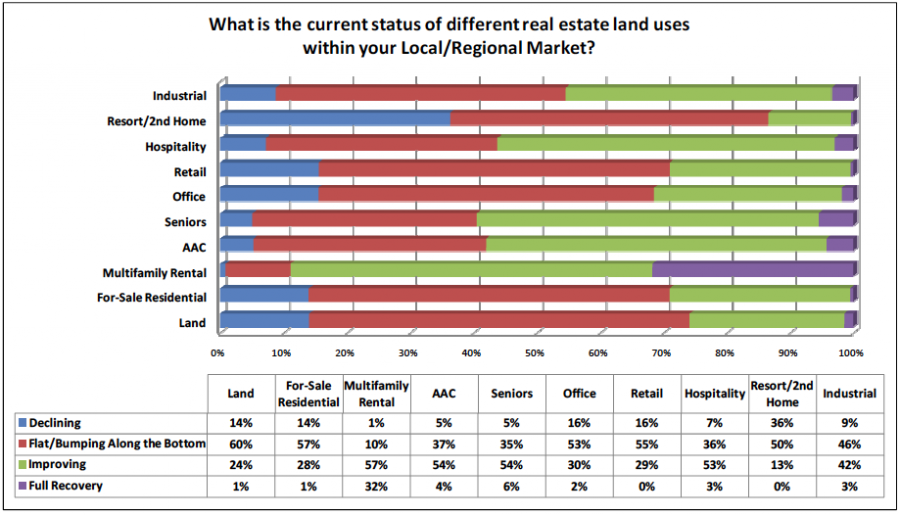 Again, there are some significant regional differences, with approximately half of respondents from the Northeast reporting that the multifamily rental sector is already in Full Recovery mode.

The majority of respondents who report the Multifamily Rental markets are not yet in “Full Recovery” mode believe they will fully recover within the year. Several sectors, including AAC, Seniors, Hospitality, and Industrial, are expected to recover within the next one to two years. Land, For-sale Residential, Office, Retail, and Resort/2nd Home will take two or more years to reach “Full Recovery.” 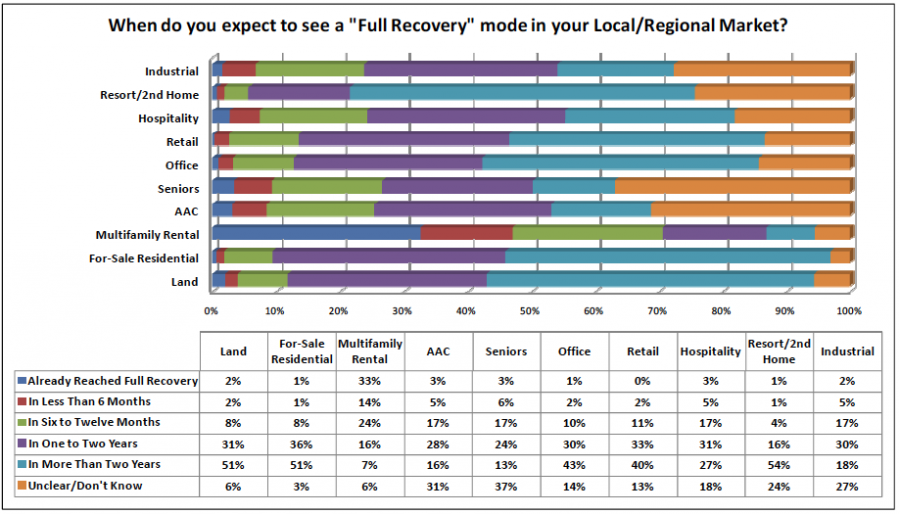 The sentiment regarding the availability of capital over the next year closely mirrors the consensus regarding the current status and timing for recovery. Few believe there will be abundant capital for most deals, even in the coveted Multifamily Rental space (27%). There will be selective capital for good deals in Multifamily Rental (49%), Seniors (37%), AAC (33%), and For-Sale Residential (25%). However, there will be only limited or no capital available for the majority of deals in the following sectors: Land (82%), For-Sale Residential (73%), Office (75%), Retail 77%), Hospitality (72%), and Resort/2nd Home (91%). The results from the 3Q 2011 survey are fairly consistent across the board with the sentiment expressed in the previous survey, indicating that with the exception of multifamily, access to capital markets remains a significant challenge. 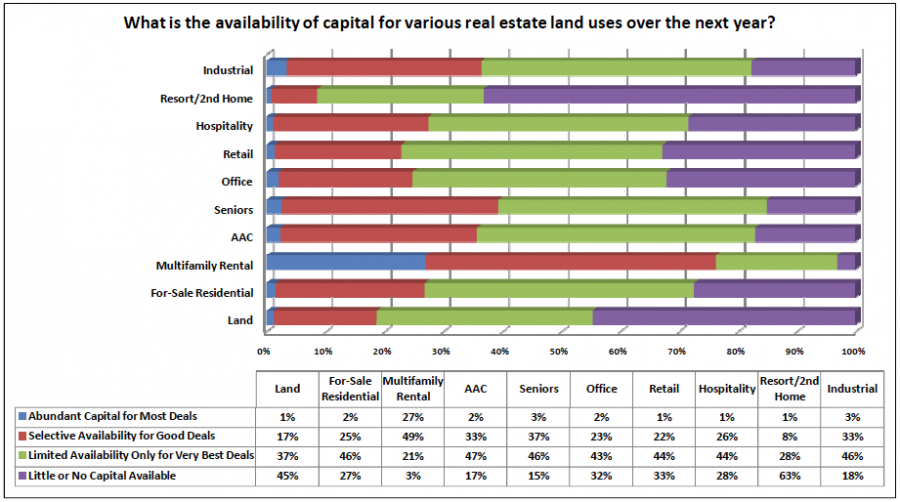 When a lot of capital is chasing a relatively limited number of good deals in a select number of strong markets/submarkets, and absent attractive investment alternatives, there has to be a risk of a potential bubble. This pretty well describes the Multifamily Rental Apartment market in places such as Washington, D.C., New York, Boston, and Coastal Southern California. However, relatively few of the respondents expressed concern about the potential risk of a Multifamily Rental bubble in their market. 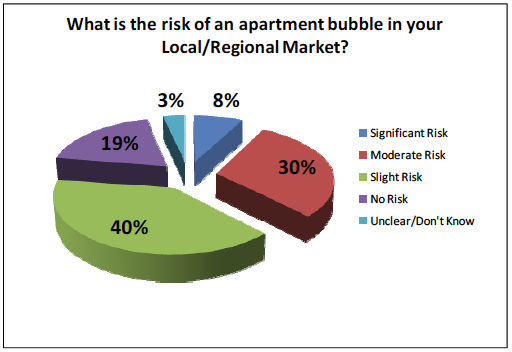 Strategy Implications of the Cycle

From the results of this most recent RCLCO National Real Estate Market Sentiment Survey, it seems that most real estate related entities have stabilized their platform and are positioned, or are positioning, for growth. 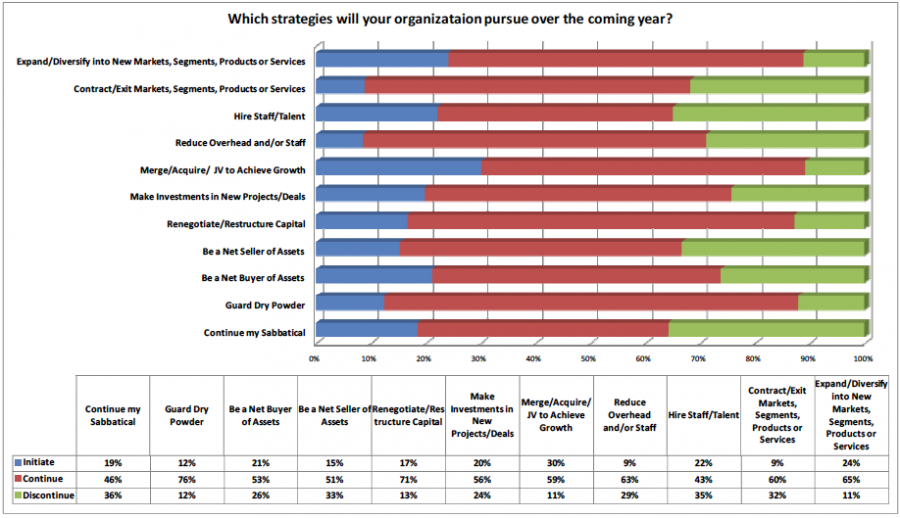 Approximately half of the companies surveyed (47%) report that they intend to either initiate or continue hiring staff/talent over the next year – this is similar to the expectation from a year ago, despite some softening in the future expectation for growth in the economy.

While many companies remain vigilant in their efforts to contain overhead/costs, far fewer companies plan to continue reducing overhead expenses or cut staff over the next year (47%) compared with 76% at the time of the last survey. Similarly, far fewer report that they will initiate or continue efforts to restructure the capital structure of their firms/projects over the next year (42%), vs. 66% from the previous survey. The reality is at this point in the cycle, either real estate companies have succeeded in stabilizing their balance sheets and right sizing their organizations to the new level of activity, or they are most likely gone.

Having said this, most folks in the real estate industry are back to work, even in the face of considerable headwinds and uncertainty. Far fewer market participants report that they plan to “continue their sabbatical” over the next year (18%) compared with 40% who reported that they planned to “go fishing” at the time of the last survey.

Back in October 2010 we predicted in this space that the US economy was likely to experience slow, uneven recovery climbing out of the Great Recession. Further, we predicted that there will be periodic disruptions to the recovery, as global capital markets and political events “spook” both consumers and investors. This has largely played out as predicted.

In the early summer of 2011, we predicted that the increasing negative sentiments about the US economy were being driven by temporary, short-term events (weather, energy prices, natural disasters), and that these events would slow the rate of the recovery but not reverse the course from recovery to a second recession.

Since that time, we have experienced fierce political partisanship leading to a show down on Capitol Hill over the debt ceiling and precipitating a downgrade of U.S. government treasuries, increasing risk of default in the Euro Zone, continued lackluster job growth in the US, a spike in housing foreclosure activity, and declining consumer confidence.

Despite these new developments, we still believe the economy and real estate markets are on a road to recovery – but we have to acknowledge that the markets are in a more fragile state today than just two or three short months ago, and that the risk factors that could alter this trajectory are more numerous and potentially more ominous than before. And where we once felt confident predicting accelerating growth in the latter half of 2011 and into 2012, this could easily be pushed off by two to three quarters, with 2013 and into 2014 representing a good case for the next “new normal” is the US real estate markets.

Even as the markets continue to recover, as we expect they will, the road to recovery in the real estate industry will be slow and uneven. There will be metropolitan regions, submarkets, and even particular deals/investments in both good and bad markets that will be winners and losers. The trick is to figure out which ones you are dealing with, and to have sound, market-based analytics supporting your strategy and your underwriting assumptions.

Participants in the real estate industry that are expecting a return to “normal” any time in the near term may be in for an unpleasant surprise. Going forward, success will come to those who can unearth and “manufacture” opportunities that others cannot; develop creative ways to raise, deploy, and recycle the limited amount of capital that will be available; and create/capture unique market niches.

The Changing Nature of Public Funding

In the most recent RCLCO National Real Estate Market Sentiment Survey, participants were asked what changes they expect to see with regard to the availability of federal, state, and/or local funding sources to support development over the next year.

Based on the responses, there is a clear consensus that availability of capital from public sources will become increasingly difficult to come by. 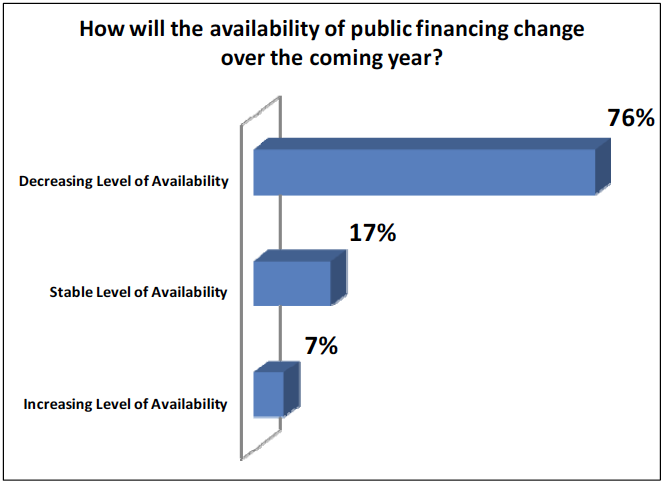 There may be good reason for this sentiment. After all, the GSA has dramatically scaled back its future spending plans for space, and HUD financing, which was tight to begin with, is reportedly shut down for the balance of the year. Don’t bank on either as your project’s lifeline.

Moreover, there is a continued structural mismatch between various federal project financing sources and the growing demand for urbane locations and mixed-use environs.

To be sure, knowing how
to navigate the public financing system has become a full-time job for many in real estate today. If you are thinking of tapping into these sources, you will need to get very savvy in public finance, and look for project money in unusual places (such as transportation and sustainability).

We were curious, and so we asked the question. So please indulge us while we share the results: 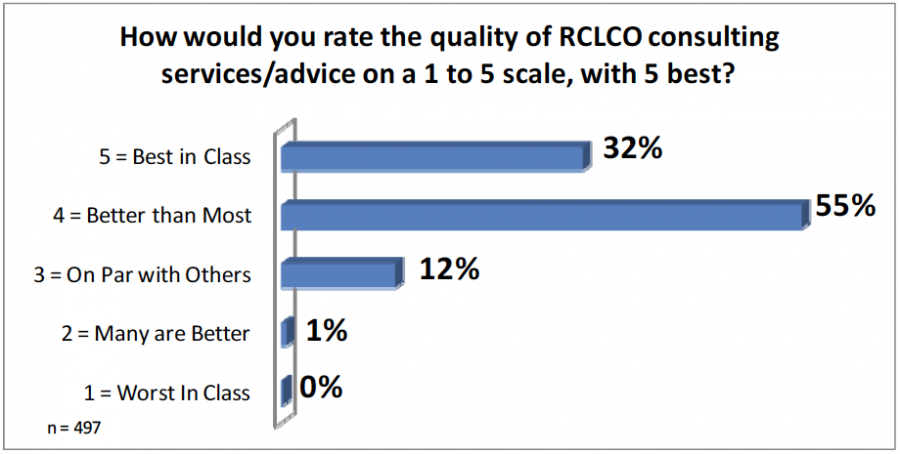 We appreciate the feedback.