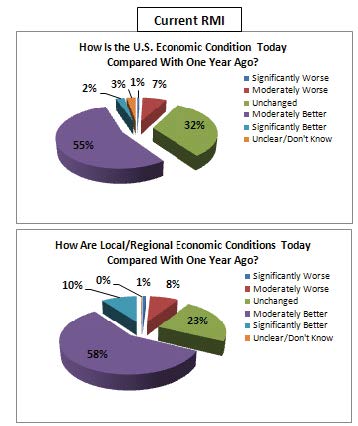 Real estate industry professionals have become dramatically more positive about the current and likely future state of the economy and real estate markets. And this was even before the release of the better than expected jobs report in January, which indicated that the U.S. economy added 257,000 jobs while the unemployment rate dropped to 8.3% – a three year low. Is this exuberance rational? We think so.

Both components of the RCLCO Real Estate Market Index (RMI)1 —Current and Future—swung sharply positive in the fourth quarter of 2011 compared with the previous quarter. What’s more, both indices are now well above 60, which is typically indicative of strong or clearly improving economic and real estate market conditions. Real estate market participants are feeling good about trends in the underlying economy, and the results point to a consensus that the recovery has gained traction and is sustainable, which bodes well for real estate.
Current Conditions

The Current RMI, which measures real es- tate industry market participants’ sentiments about the current state of the U.S. and vari- ous local and regional economies and real estate markets compared with one year earlier, rose to a value of 75 for the U.S. overall, and 79 for Local/ Regional markets in the fourth quarter 2011. This represents an increase of over 30 and 25 points, respec- tively, since 3Q 2011. Nearly 60% view the U.S. overall as “Better” today, compared with only 20% in the previous survey—and nearly 70% report that their respective Local/Regional markets have gotten better. Fewer than 40% of survey respondents reported that their Local/Regional markets were getting better just one short quarter ago. Equally encouraging is the fact that only 8% of survey respondents believe that overall U.S. market conditions are worse, and just 9% think their Local/Regional markets have gotten worse. This is a significant improvement over the 3Q 2011 survey, when nearly half of all respondents felt that the overall U.S. economy and real estate markets had gotten worse, and over 30% said their Local/ Regional markets had gotten worse—quite a dramatic change!
Outlook 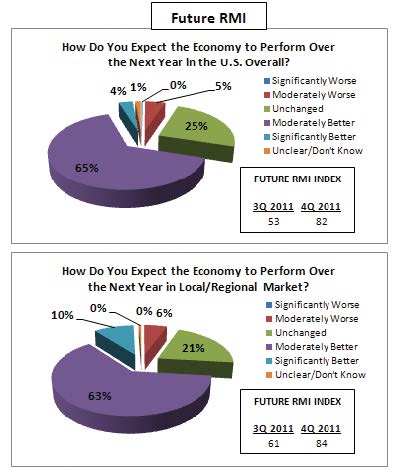 Real estate industry professionals are increasingly positive about the future prospects for the economy and the real estate markets. The Future RMI, which measures the sentiment about the market over the next 12 months, indicates overwhelming optimism about the durability of the recovery. The Future RMI for the U.S. overall rose nearly 30 points from 3Q 2011 to 4Q 2011, with over two-thirds of participants predicting that conditions will improve in the next year.

Similarly, the Local/Regional market sentiment rose 23 points since the previous quarter for a Future RMI of 84. Nearly three-quarters of the respondents expect the economy and real estate markets will be moderately or significantly better over the next year. 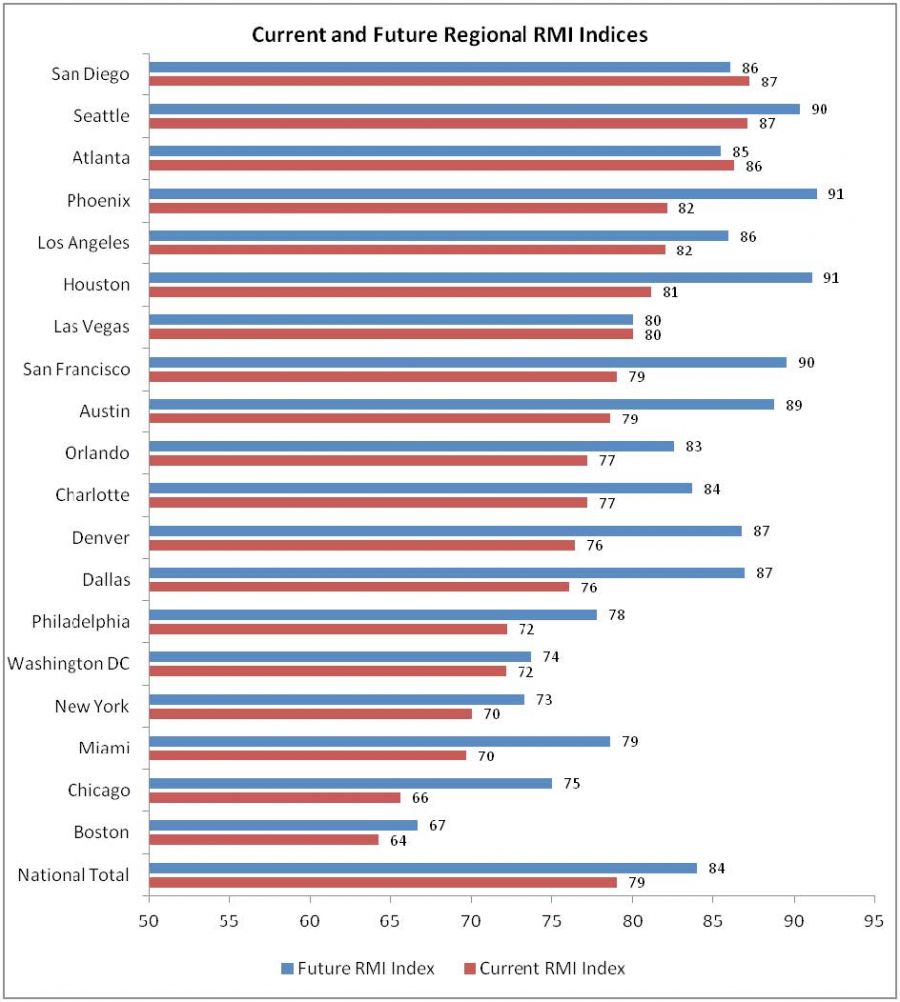 The level of optimism varies across the country, as illustrated in the chart above. And yet, the overall positive sentiment about the current and future state of the economy and real estate markets is universally high, with respondents in every major metro reporting a Current RMI above 60 and more than half above 75. This is in sharp contrast with 3Q 2011 survey results, when nearly 70% of the major markets received RMIs below 60. The sentiment among real estate market participants has changed markedly to the positive in such hard hit metropolitan regions as Phoenix, Las Vegas, Miami, and Los Angeles. Curiously, the sentiment among real estate professionals active in the Boston metropolitan region is significantly below the national average, despite the fact that this market has experienced above average job growth—perhaps they had a premonition about Super Bowl XLVI?! 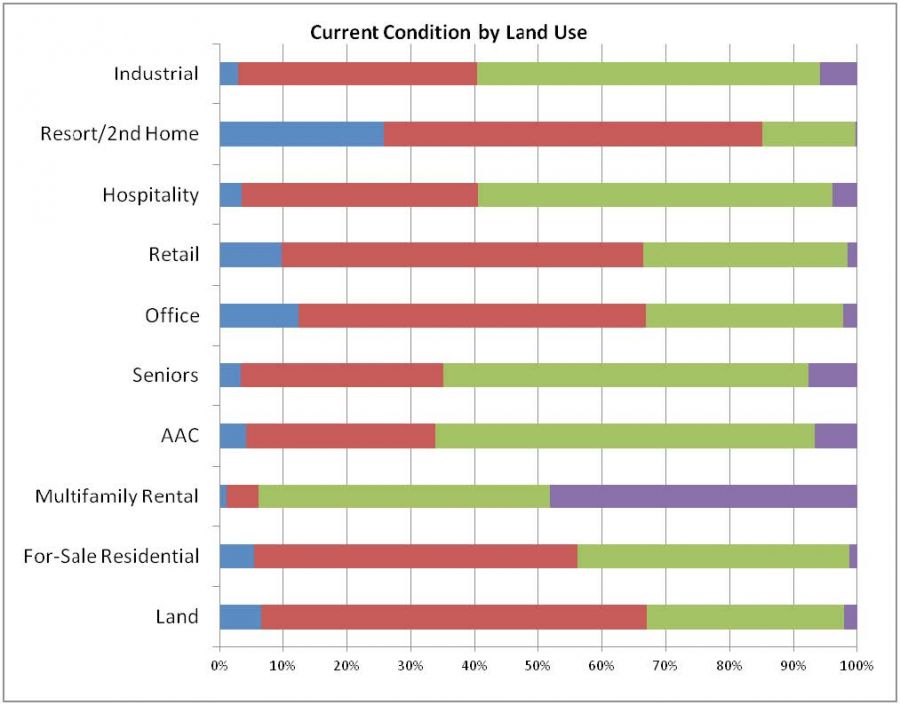 As in the previous survey, multifamily continues to lead the pack—48% of respondents report that this sec- tor is already in “Full Recovery” mode, with another 46% reporting that multifamily is “Improving.” No other real estate sector even breaks double digit response rates in term of full recovery, with most below 5%. However, the good news is that the momentum index (the quarter over quarter change in the sentiment by land use) is increasing significantly for for-sale residential and increasing for land and industrial. All other land uses have improved since the last quarter somewhat but are generally below a 20% increase in the index, which we define as being “Flat.” 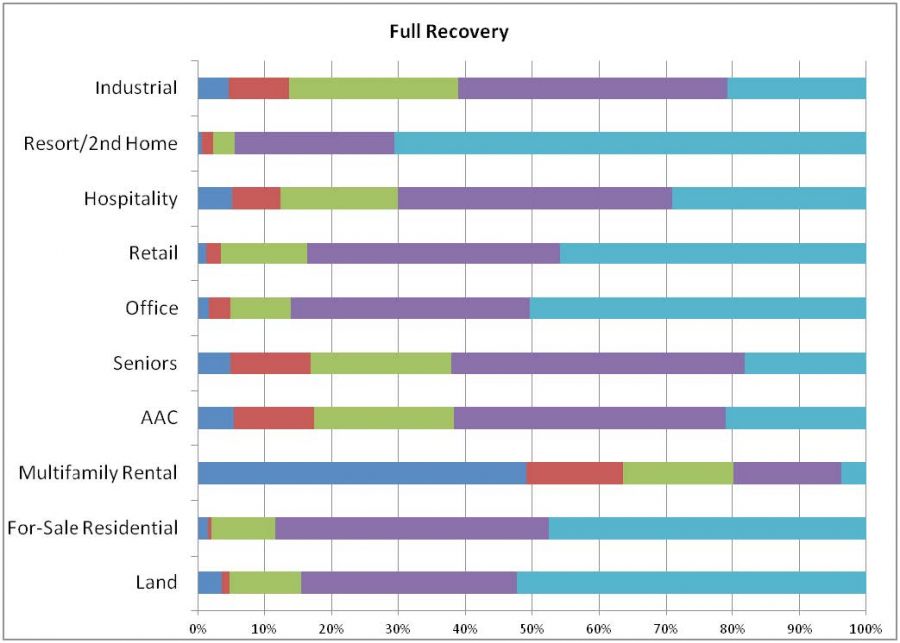 While the overall market sentiment has improved dramatically since 3Q 2011, real estate industry profes- sionals still believe that the recovery will be slow in a number of sectors. Over 70% of respondents think it will take more than two years for the resort/2nd home sector to return to full recovery mode, and ap- proximately half of those surveyed think it will take that long for land, for-sale residential, office, and retail to fully recover.

In 3Q 2011, we reported that the economy and real estate markets were on the road to recovery, and that we expected steady, albeit modest, growth for the next few quarters. The latest RCLCO sentiment survey seems to indicate that we are not alone in that assessment. The latest jobs and unemployment reports were a welcome positive surprise—one that was perhaps foretold in the significant increase in the Q4 RCLCO RMI indices. We expect that the waters will continue to be choppy for the next few quarters leading into the election cycle, with up and down swings in economic and real estate market indicators that will alternately reinforce and erode confidence in the durability of the recovery. And yet, despite some not insignificant exogenous risk factors (including Euro Zone slowdown, or worse, meltdown; a possible mili- tary conflict in Iran; etc.), we believe the U.S. economy and real estate markets will continue to improve in 2012 and beyond.

On the eve of the New Hampshire GOP Primary, RCLCO polled a national sample of real estate industry professionals regarding the upcoming presidential election. Our unscientific straw poll indicates a very close race, with 51% indicating that they believe incumbent Barack Obama will prevail in November. 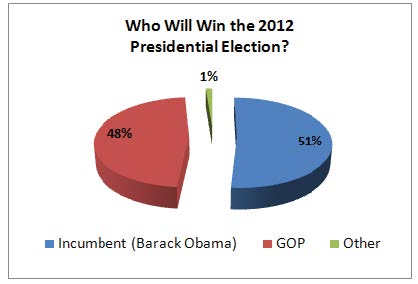