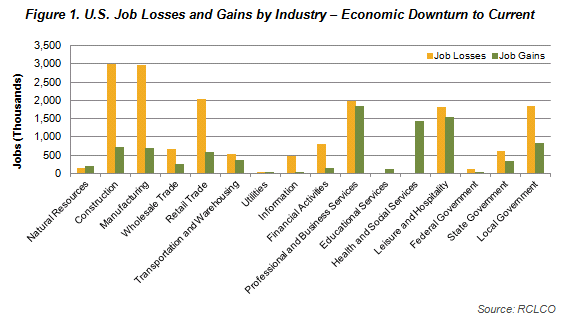 While the 4th quarter 2012 GDP growth estimate of -0.1% is disappointing, some local economies are bucking the trend. Job growth last year exceeded 3% in such markets as San Jose, Houston, Boulder, and Austin, and even in markets like Oklahoma City and Louisville. Even the housing market is improving in many areas—with double-digit housing price increases in previously downtrodden markets such as Phoenix and Detroit.

As is typical during economic recoveries, growth is returning in a disparate pattern across the country. While job losses occurred in a broad swath of industries during the 2008-09 downturn, including both goods-producing industries and service-oriented industries, the service sector has dominated the recovery. Figure 1 shows the total job losses from peak to bottom during the 2008-09 downturn and then the subsequent gains (if any) of jobs since the industry reached bottom. For example, both the construction and manufacturing sectors lost approximately 3 million jobs during the downturn, but have gained back only slightly more than 500,000 jobs, resulting in a net loss of 2.5 million jobs in each sector. In contrast, employment in industries such as energy and health care is reaching new highs, with business services, transportation, and hospitality nearly fully recovered. 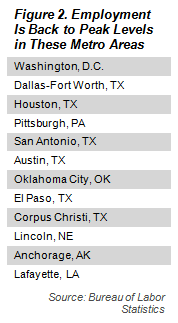 Consequently, metro areas with high concentrations of service-based jobs are doing well. Many areas of Texas are at peak employment levels, as are other regions—particularly those that have high levels of energy and health care jobs (see Figure 2). Few federal government jobs were lost in the downturn, boosting economic strength in markets such as Washington, D.C., although job growth there has been slowing lately.

As economic growth is a precursor for real estate demand and new home sales, we set out to find which metro areas are expected to have the strongest economies in the next year. We ranked more than 300 U.S. metropolitan statistical areas based on economic strength as measured by current and forecast job growth, population growth, income levels, and ratios of the working population to the total population. The data set includes metro areas with populations ranging from 55,000 to more than 10 million.

Job Growth—New jobs boost income levels, create mobility in housing markets, and encourage in-migration. The model includes one-year forecasts of total non-agricultural employment, on both absolute and percentage bases. We would prefer to see markets that have some momentum (and verification of the forecast). Thus, both job growth during the past quarter and during the past year are included in the model. The four job growth factors account for 25% of the total model.

Working Population—The age balance of the local population is important, as a large number of non-working individuals creates an economic burden on those who are working in terms of higher needs for social and health services, with fewer workers to sustain tax bases that support everything from educational institutions to safety, health, and welfare. While some low-cost, warm-weather regions have certainly created a growth strategy by attracting retirement communities, metro areas with unusually large proportions of non-working individuals are likely to experience slower economic growth, lower incomes, and long-term imbalances that impede the local economy’s ability to support growth going forward.

Income—Top-growing metro areas have strong corporate and household sectors. Local costs of doing business as well as other demographic and economic factors have a large influence on the relocation and growth of companies in an area. Additionally, jobs that pay well better support retailers, allow individuals to buy larger and newer homes, and withstand economic downturns. Forcasted forward GDP growth thus accounts for 15% of the model. Median household income accounts for another 15% of the model. It is measured primarily as the current level of income, although we also consider forecast growth for the next year.

Results of the model are shown in the map below. Top-ranking metro areas are expected to have strong economic growth prospects in the upcoming year, driven by positive job growth, a growing working population, and high incomes. While the typical coastal and southern markets again top our rankings, it is interesting to note that a few Midwestern metro areas, such as Minneapolis, Columbus, and Indianapolis, also ranked highly. While these markets tend to be moderate growth areas, they have strong income levels, relatively low costs of living, low unemployment rates, and a solid working population base. Many of the Florida markets, such as Tampa and Miami, follow close behind with similar growth prospects, but are currently ranking slightly lower due to less desirable working population rankings, which are being influenced by both above-average unemployment rates and larger proportions of non-working and elderly populations. 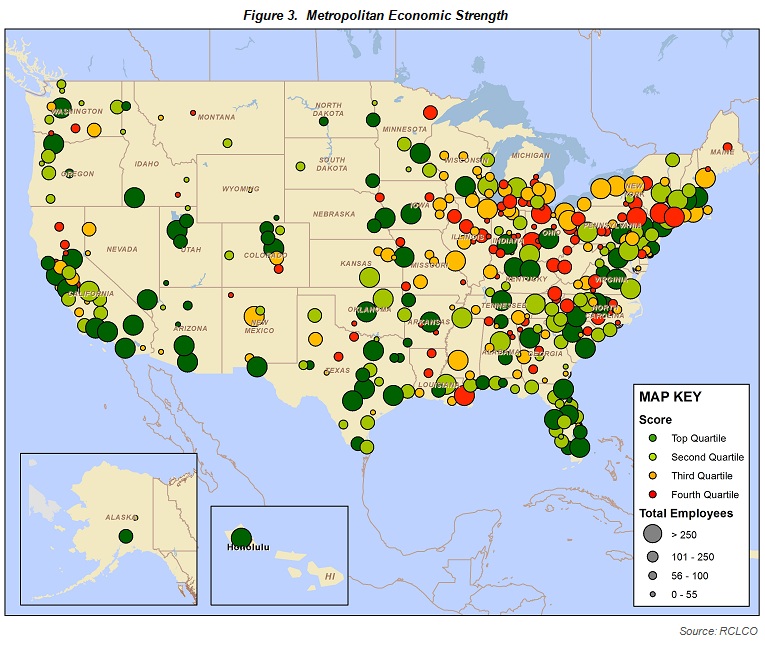 We then sorted the metro areas by size to get a better view of the smaller metro areas. Large metro areas in Figure 4 below are classified as those with employment bases of 800,000 or more. Small metro areas have employment bases of less than 100,000, and those in the Midsize category are in the 100,000 to 800,000 range. Texas stands out in this list, occupying two of the top five rankings in the Large category and three of the top five rankings in the Small category. Diversified employment bases, including energy and technology sectors, are benefiting the Texas economy as are low cost of doing business, warm climate, and proximity to trade routes. The influence of the energy sector is also seen in high rankings in parts of the Dakotas, Nebraska, and Alaska. Smaller technology-heavy markets in both the Pacific Mountain region and coasts are also doing well. 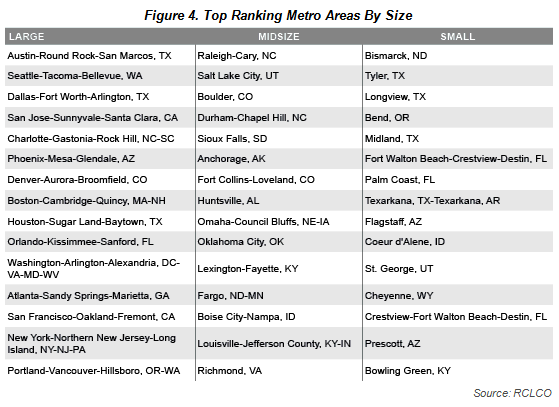 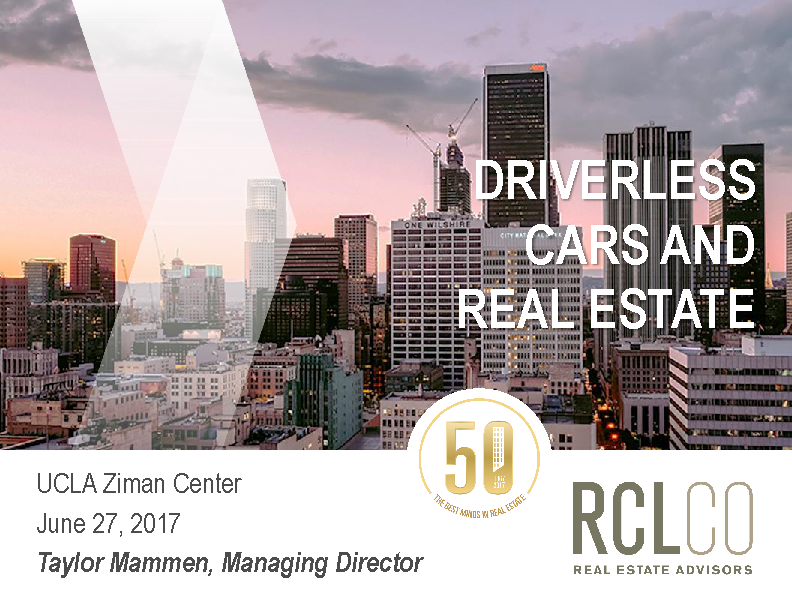 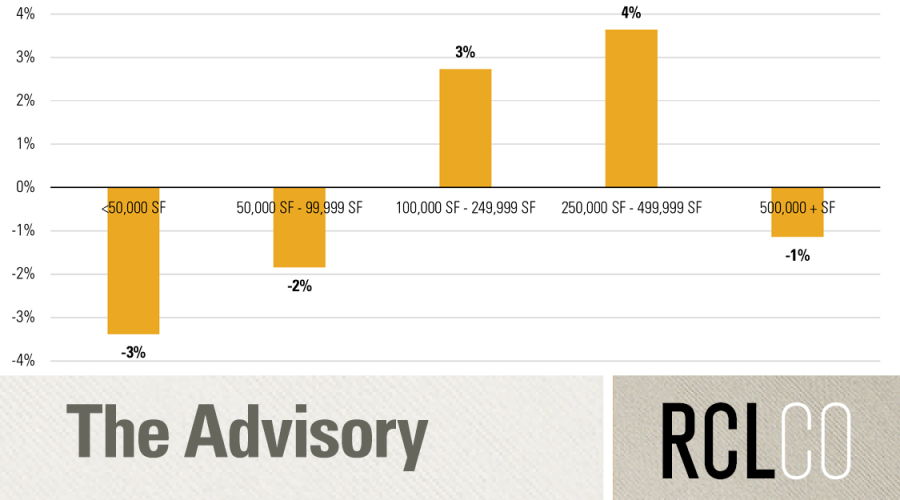 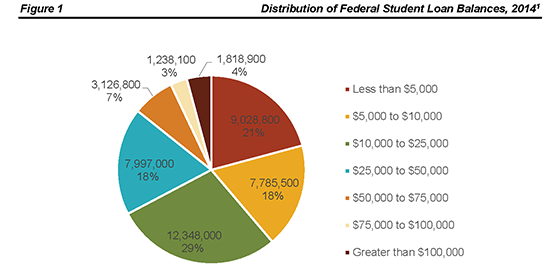 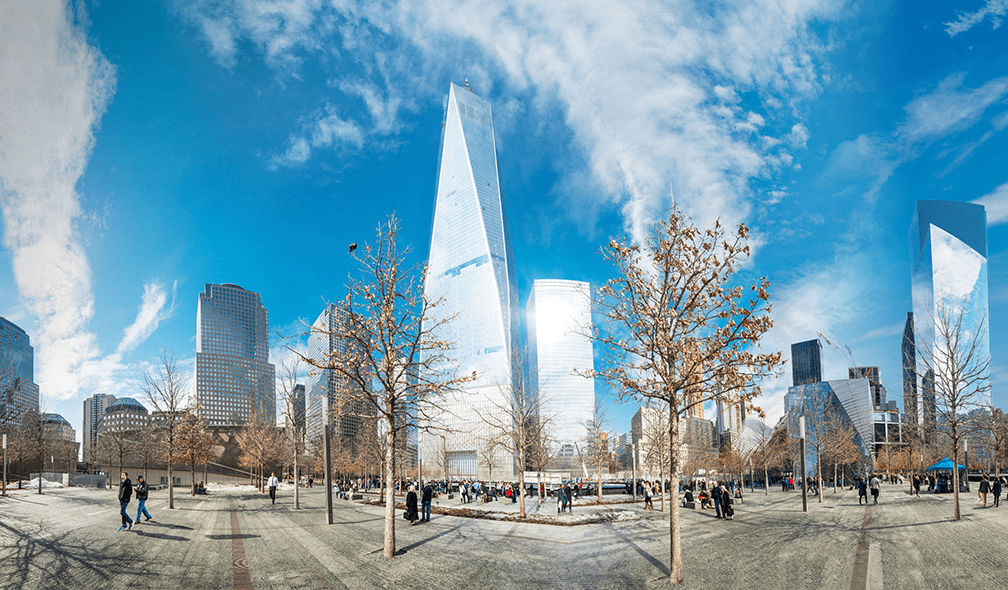 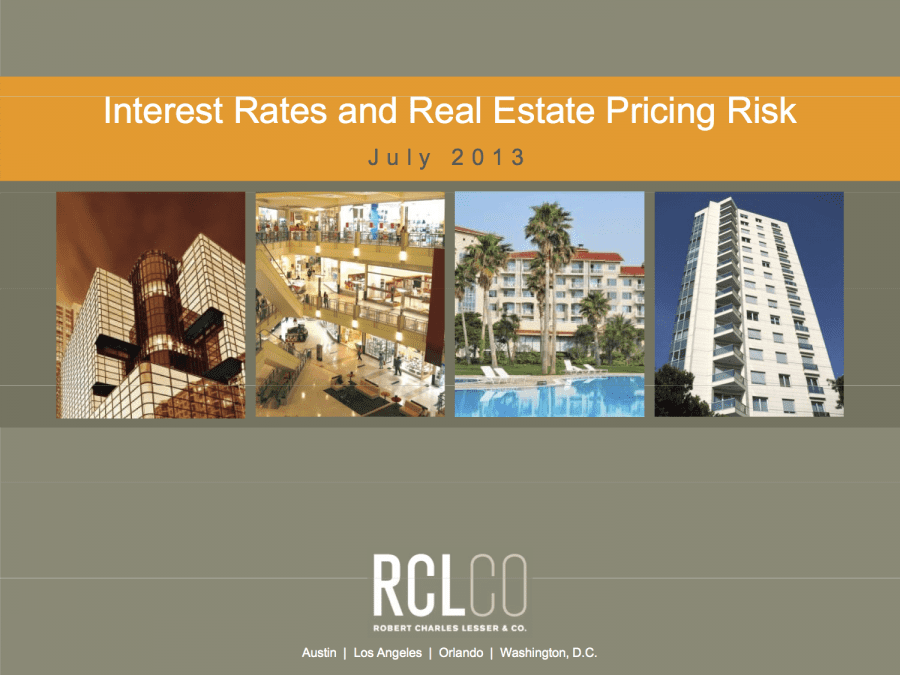