The “Tax Cut and Jobs Act” (TCJA) has passed, cutting corporate tax rates from 35% to 21%, with a goal of stimulating economic growth, encouraging investment and bringing back funds currently parked overseas to avoid taxation. The changes to the tax code affect a wide range of the economy, with particular provisions affecting real estate. These include shrinking income tax deductions for mortgage interest, effects on household purchasing power, more favorable treatment of pass through income benefitting income property owners, and the anticipated increases in the federal budget deficit, potentially influencing interest rates. There is also concern that the large reduction in the corporate tax rate will reduce the tax loss benefits of LIHTC investments, possibly impacting affordable rental housing production. The biggest real estate winners under the new tax law appear to be the owners of income property, while owners of very expensive homes in high tax cities and states will lose some benefits.

From a consumer demand perspective it’s important to note that the TCJA will reduce taxes for most income groups in 2019, increasing after tax incomes, although about 7% will experience a tax increase. In the short term the tax cuts are expected to boost business capital investments and wages, spurring the economy and bumping up GDP. While the bill has been marketed as a Christmas present for the middle class, it is heavily skewed toward upper income families and corporations. By 2027, after the individual taxpayer provisions in the TCJA expire, almost a third of taxpayers will see their taxes go up1.

Housing subsidies embedded in the tax code, i.e. the deductibility of mortgage interest and state and local property taxes (SALT), have effectively lowered the after-tax cost of homeownership, encouraging a “move-up” market sentiment among US households seeking bigger and better homes as they advance through various life stages. The TCJA’s limits on mortgage interest deductibility (MID) and caps on SALT deductions, along with its doubling of the standard deduction available to all tax payers, effectively reduces the value of those real estate-related deductions, and thus some of the incentive to own rather than rent housing. The final bill caps MID at $750,000, with SALT deductions capped at $10,000. Not all homeowners own homes valued high enough to itemize their mortgage and property tax expenses, and doubling the standard deduction will result in even fewer households itemizing. Nonetheless, under these provisions the most expensive owner-occupied homes will now have less in the way of tax benefits. While most people don’t own homes valued over $750,000, this still represents a major shift in policy, as historically the tax code has encouraged buyers to purchase larger and more expensive homes. The mortgage interest deduction is a part of the value of home ownership, and its reduction effectively reduces home values, at least at the very high end of the price spectrum. The fact that housing inventories are currently tight likely helps moderate that impact for the present.

The cap on the ability to deduct state and local property taxes may incentivize some Americans to leave high-cost markets for more affordable places, which could reduce the attractiveness of many cities where prices and rents take a bigger bite out of income. The doubling of the standard deduction makes itemizing less important, which may make renting equally attractive to many households no longer concerned with having a mortgage to write off their taxes.

Besides making home ownership slightly less attractive for some by reducing tax benefits at the upper end of the housing market, the tax bill’s influence on the purchasing power of households also has implications for real estate demand. In the short term most taxpayers get a tax cut, although more than half of the total tax change goes to those earning over $239,000: 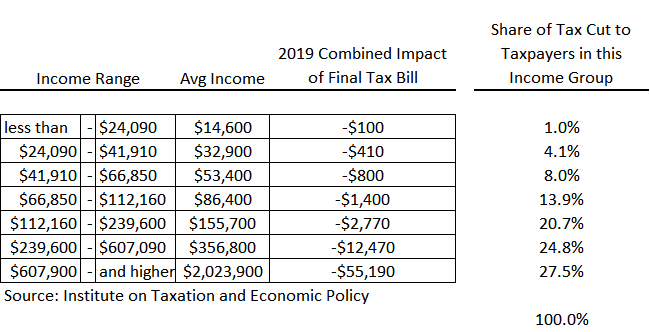 The table above shows the net impact of the various changes in the bill, i.e. the combined impact of the change in tax rate, increases in the standard deduction and child tax credit, repeal of the personal exemption, and the $10,000 limit on deductions for state and local taxes. In the near term, the modest tax cuts for households earning less than $112,000 will not do much to increase their purchasing power, and for those at the upper end for whom the tax cuts are greater, the limits on MID and SALT deductions may reduce their appetite for more expensive homes. Of course MID and SALT deductibility are not the only reasons for buying more expensive homes, and in high cost markets like San Francisco and New York the high end is the housing market. The short term effects of the tax cuts probably will not have a huge impact on housing demand except for the most expensive urban and coastal market areas. Longer term, as the individual tax payer provisions in the bill expire in 2025, and on average taxpayers earning less than $150,000 will see their tax liability increase, the overall effect of the TCJA will be to reduce purchasing power for low and moderate income households. Since only the corporate tax cuts are permanent, it will primarily be the very wealthiest American’s who own or have stock in those corporations who benefit long term.

Although not a real estate factor per se, experts expect the repeal of the individual mandate will cause premiums in the health insurance market place to increase by about 10%, taking a bigger bite out of taxpayer incomes, reducing income available for other purchases such as servicing a mortgage or paying rent.

Potential Impacts to the Economy and Interest Rates

Real estate has benefited from a sustained period of historically low interest rates. Some economists express concern that the TCJA could lead to higher interest rates due to the anticipated economic boost to demand—particularly at a time when economic performance is already relatively robust—which could encourage the Federal Reserve to increase rates to keep inflation in check. Adding $1.1 to $1.5 trillion to the federal budget deficit over the next 10 years could also lead to higher interest rates. The bill’s proponents insist that the reduction in corporate taxes will spur economic growth such that the actual growth of the deficit will be much less. They expect that corporations will use the tax savings to invest in equipment and raise employee’s wages, boosting the overall economy.

Several recent surveys suggest corporations have a broader range of ideas in mind for utilizing the tax savings. For example, in November 2017 the Atlanta Federal Reserve Bank asked executives what the likely impact of the TCJA would be on their capital investment and hiring plans. Only 8% said the bill would lead to increases in hiring, and only 11% said they would increase their capital investment plans. It’s therefore just as likely they’ll return more to their shareholders than go on an investment spree or hiring binge. What makes corporations invest and hire is increases in demand resulting from increased discretionary spending, and in the short term the tax cuts are expected to result in moderate increases in demand for goods and services by modestly increasing incomes. This is expected to boost GDP by 0.8% in 2018, and lower amounts in subsequent years, partially offsetting some of the revenue losses resulting from the cuts.

Assuming the deficit does grow as forecast, proposals for cuts to the federal budget, particularly to programs such as Medicare and Medicaid, will likely follow, ultimately influencing the financial health of many consumers, particularly older households. The non-partisan Congressional Budget Office (CBO) has already pointed out that unless Congress takes other specific action, the reconciliation legislation will result in automatic funding cuts, $25 billion of which must come from Medicare. AARP has already gone on record that they are deeply concerned about the impacts of the TCJA on the health and financial security of older Americans. This could influence the depth of demand for Independent Living, Assisted Living, and Active Adult retirement community development, since even well-off Americans depend on these programs to supplement their healthcare spending.

Two bright spots for income property owners are the TCJA’s more favorable treatment of “pass through” income and the fact that they will continue to be able to deduct interest payments on mortgages, with no cap. The change in the tax law will allow investors to take advantage of a 20% deduction on taxable income for pass through companies, making it more profitable for real estate investment trusts and limited liability corporations to own income property such as multifamily apartments and office buildings. REIT income that was formerly treated as ordinary income and taxed at higher rates is now more valuable. This is similarly true for investors who hold property via other types of partnerships and corporations. However, this pass through deduction may not apply to real estate developers because they are active in the business. Homebuilders and merchant-builders of income producing assets whose business practice isn’t to hold assets for at least 3 years after completion will likely not be able to benefit from deductions previously allowed. Real estate investors are the primary beneficiaries of this provision, which could also impact the availability of for-sale housing inventory, since it makes retaining single family rentals more attractive as well.

Overall, the bill’s impact to many real estate companies is positive, though the impacts on the housing market are quite varied, as discussed in detail above. The opportunity for single family rental properties, particularly the emerging “built-as” rental market, also appears to be a winner under the new law, given the changes to how pass through income will be taxed. REITS and other owners of income property stand to benefit from the new law, which could make the already robust multifamily apartment market even more attractive from an investment perspective. Further, all real estate investors that employ pass through entities stand to benefit from the new tax treatment.

The homeownership rate, which declined as more households have chosen to rent following the Great Recession, has been slowly recovering, but that may stall with the new law given the lower tax benefits of owning. Builders of very high-end homes, in particular, may be negatively impacted by the caps on MID and SALT, as luxury home buyers hesitate as they calculate the tax implications of moving up. Longer term, depending on the impact of the legislation on the federal budget, future impacts to entitlement programs could influence the purchasing power of the large retiring Boomer generation, impacting the demand for new retirement oriented housing. LIHTC may lose some of its attractiveness, impacting affordable housing development. Tax benefits to low and moderate income households are modest in the short term and negative longer term, and that combined with the disincentives to itemize deductions may make homeownership less of a priority for some households who will instead choose to rent.