A Big Boom in Affluent, Older Renters-by-Choice in the U.S.?

According to RCLCO’s recent consumer research with affluent Boomers in this age range, an increasing number are likely to choose to rent versus own a home on their next move, which could provide a big boost to the renter-by-choice market segment in the US.

RCLCO surveyed a random sample of over 1,000 households with head of householder in the 50 to 70 age range, with incomes of $50,000 or greater, and who indicated that they were likely to move in the next five years. Nearly all of those who responded to the survey are current home owners.

“What Are Your Housing Plans Over the Next Five Years?”

While the percentages may seem small, only a small increase in renter propensity among affluent move-down/empty-nester households translates into a significant increase in the demand for rentals. For example, if only the 6% who indicated that they would definitely or most likely rent did so, this would translate into demand for nearly 100,000 net new rental units annually in the U.S. If only one-half of this demand chose professionally managed multifamily rental communities (many of these households rent townhome and single-family homes), this would translate into demand for an additional 400 net new rental communities per year with an average of 250 units each.

So what would motivate Boomers to rent versus own? Gaining a low-maintenance lifestyle, reducing housing costs and using home equity for other expenditures, and downsizing to a smaller home are the top three reasons.

Why Rent Rather Than Own? 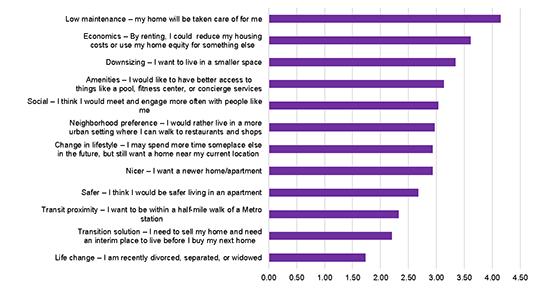 What would it take to convince a larger share of Boomers to give up ownership and join the renter-by-choice segment of the market? The rental apartment industry would have to convince Boomers that historical increases in home values are a thing of the past, or at least not something they can bank on. Building equity is the most common response given as to why to own over renting.

Why Own Rather than Rent? 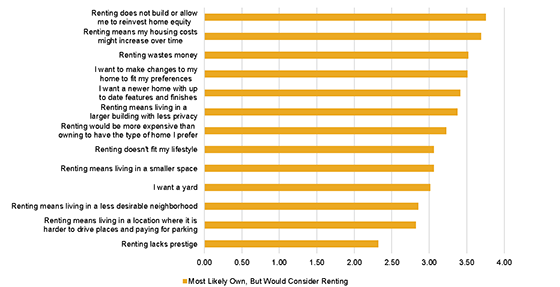 Apartment owners and operators will also have to overcome Boomers’ fear that rental increases could end up costing them more in the long run if they choose to rent instead of owning, and that it is okay to pay someone else’s mortgage over time. And owners may have to be more accommodating to members of the “me” generation, and figure out a way to allow Boomers to customize their rental homes to fit their need for personal expression.

Boomer renter-by-choice prospects, who have been out of the rental apartment market for a while, may be in for some sticker shock. Affluent Boomers who are open to renting want relatively large two-bedroom and three-bedroom units in the 800 to 2,000 square foot range. However, they generally want to pay less than $2,000 per month for the privilege.

Renter Preference: Number of Bedrooms, Size, and Monthly Rent for Next Home 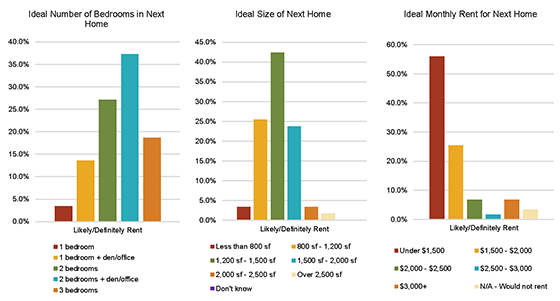 So even if they are willing to pay the top end of this range for the average 1,400 square foot unit in their preference range, this translates into a value ratio of less than $1.50 per square foot per month, which is far below the market for most Class A, and even many Class B, apartments in many of the most desirable markets in the country.

The RCLCO consumer research findings are consistent with a trend that has been emerging over the past few years: an increasing percentage of affluent Boomers have been choosing to rent. According to the American Community Survey (ACS), renter propensity among households headed by those in the 50 to 70 age range with incomes of $50,000 or more have increased 250 basis points over the past several years, from a rate of 11.4% in 2010 to 13.9% in 2015. 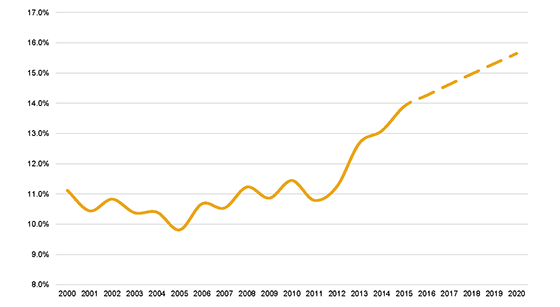 The potential demand for 100,000 net new rental units each year discussed above would be a continuation of this trend, and boost renter propensity among these affluent Boomers to 15.6% in 2020.  That’s a huge potential market, and would represent a big boost to apartment community developers across the country.