How Long Will the Expansion Continue? Sentiment Survey Mid-Year 2017: Part 2

As detailed in Part 1 last week (read it here), respondents to RCLCO’s latest Market Sentiment Survey are feeling slightly less optimistic than they were six months ago, but most still see continued stability in market conditions for the near- to mid-term. Two-thirds (65%) of respondents believe the next U.S. real estate market downturn will not begin until at least 2019, and current sentiment is higher than it was a year ago. As such, respondents predict maturing but stable conditions to continue for at least the next year for most real estate product types. Nonetheless, they remain vigilant about when markets tick over from late stable to early downturn conditions, and how much upside remains. Sentiment suggests apartments and retail may be the first to peak.

Consistent with the gradual decline in sentiment since RCLCO’s year-end 2016 survey, respondents report most product types are still coasting in the stable phase of the real estate cycle, with few major changes from the sentiment levels reported six months ago. 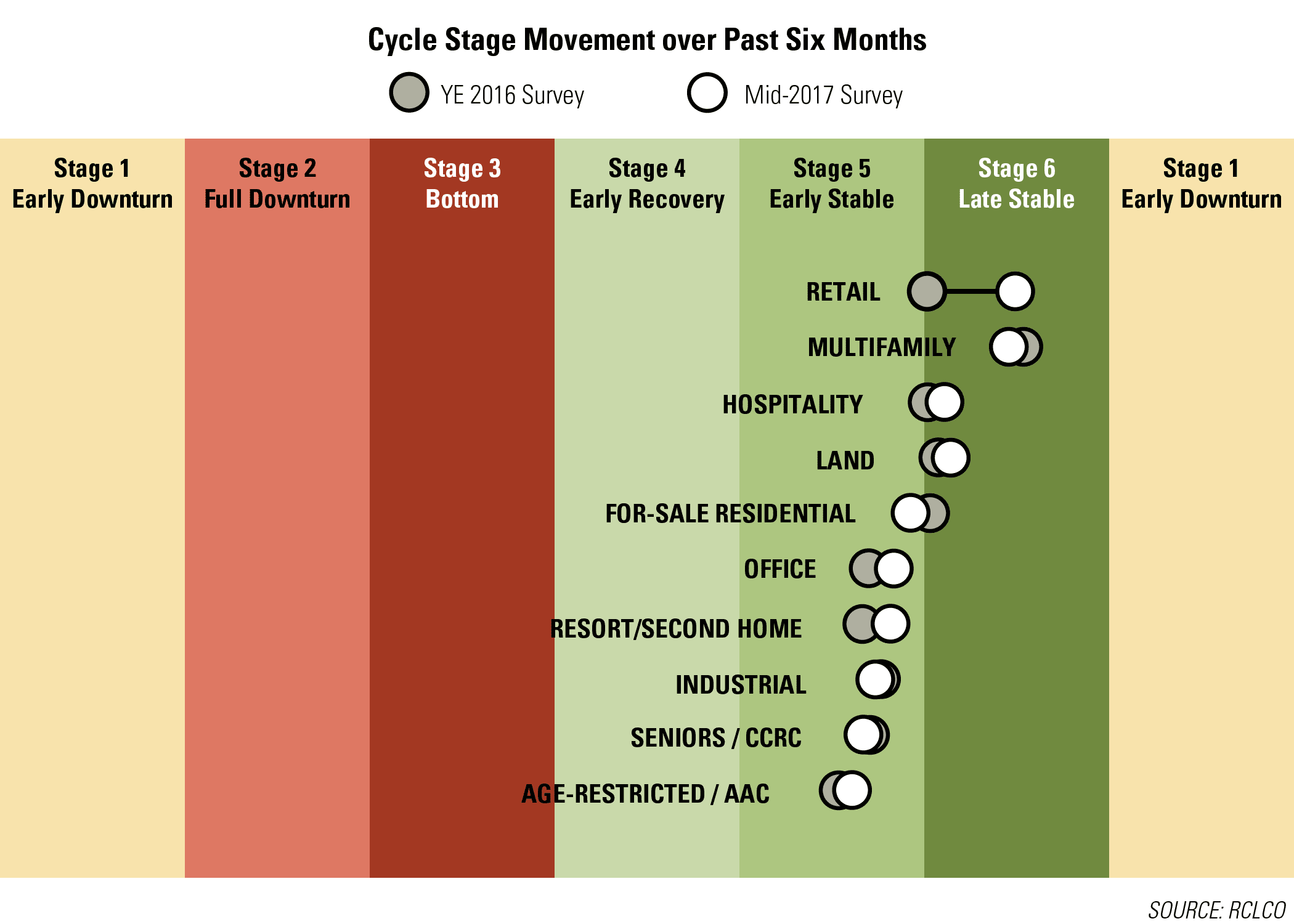 Some land uses, such as office, resort/second home, and age-restricted, inched closer to the late stable phase. Other uses—notably multifamily and for-sale residential—have backed down from the peak slightly. The most prominent change in sentiment was in retail, most likely in part reflecting short- and longer-term concerns about how retail will respond to e-commerce threats.

Despite the slow rate of progression of sentiment for most land uses over the past six months, respondents indicate that they believe all land uses will be in the late stable phase within the next 12 months. Multifamily and retail uses are expected to be the most mature next year, with both projected to be very close to the peak. Land, hospitality, and for-sale residential are expected to be farther along in the late stable stage as well. 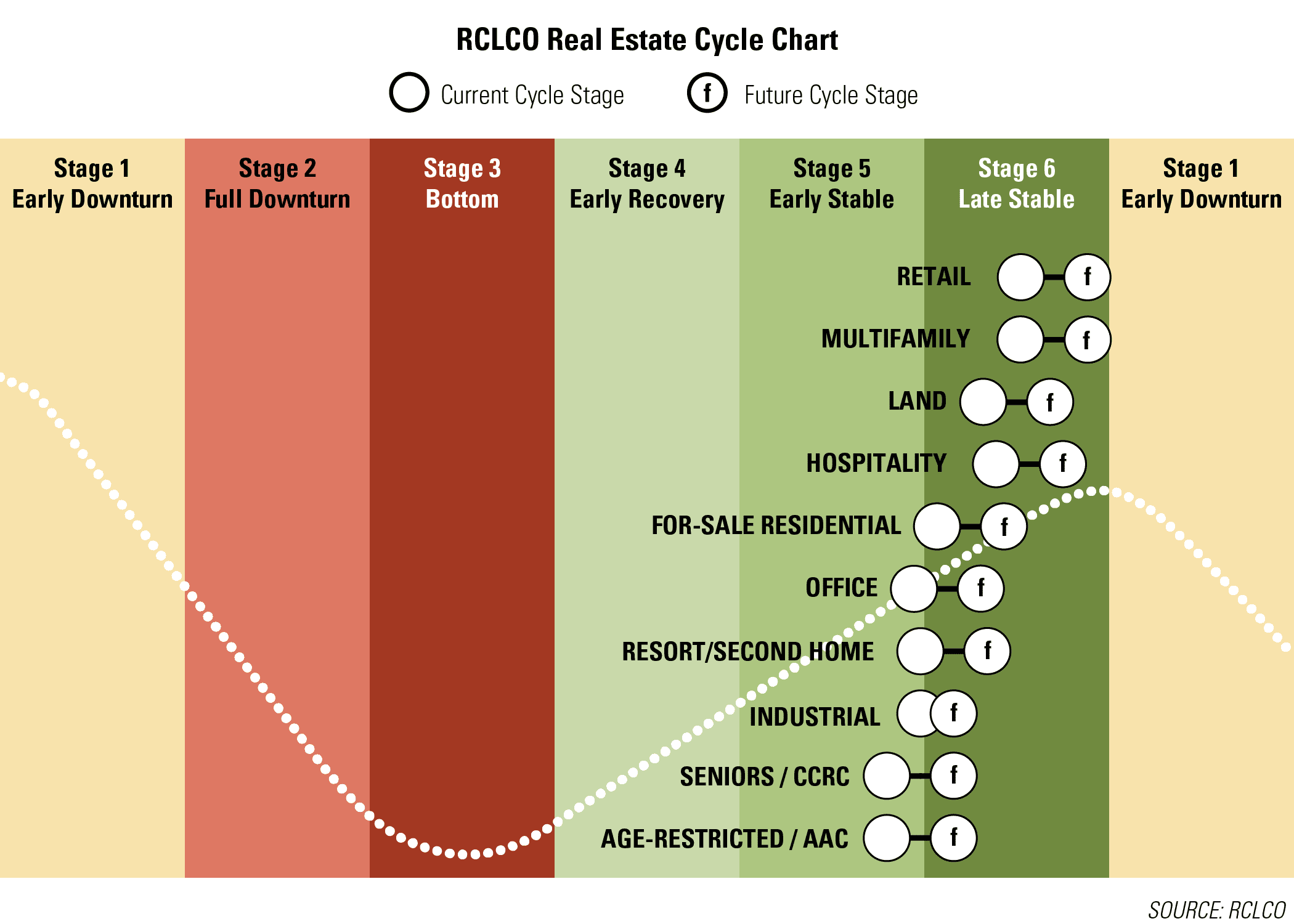 Apartments have been the big winner of this real estate cycle. According to RCLCO’s survey, apartments were the first segment to enter the early stable phase of the cycle, all the way back in mid-2012—one year earlier than any of the other segments. The year-end 2016 survey saw a significant increase in negativity from respondents on apartments, with 40% anticipating early downtown conditions within the next 12 months. This outlook remains effectively unchanged six months later, with 38% predicting an apartment downturn by midyear 2018. While late stable conditions have continued for longer than some have anticipated, many respondents are still expecting downturn conditions within the mid-term.

This cooling moderation of pessimism is reflected in the share of respondents reporting a moderate or significant apartment bubble risk in their market, with 61% indicating some risk. This is down four percentage points from six months ago and is effectively the same as conditions reported a year ago. 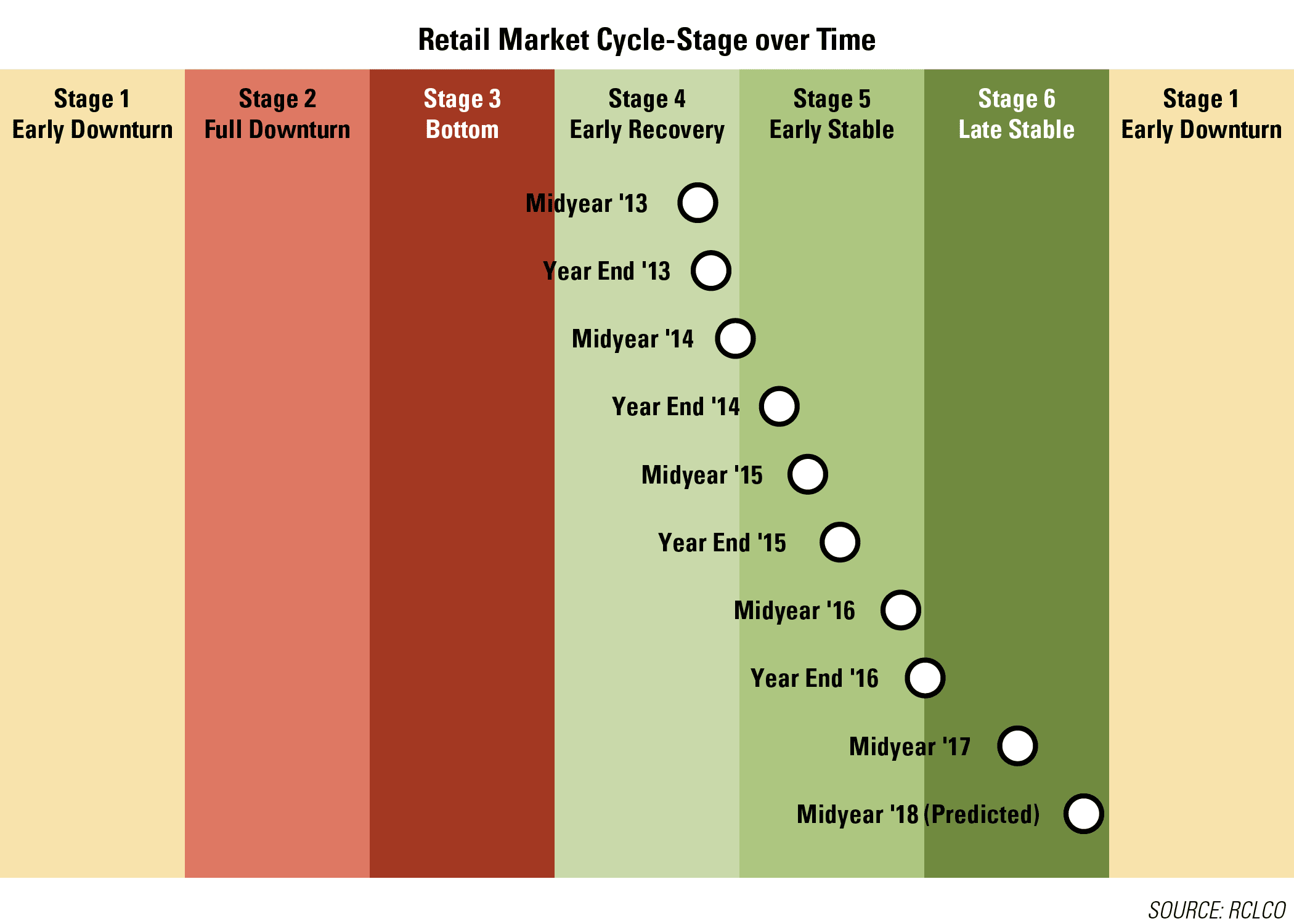 Retail experienced the largest swing in sentiment since year-end 2016. Respondents over time have indicated an acceleration in the movement towards early downturn over the past six months. From year-end 2014 to year-end 2016, retail moved slowly through the early stable stage. In the most recent survey, respondents moved retail firmly into the late stable stage, and forecasted that retail will be close to the early downturn stage within 12 months. If these predictions hold, retail would have moved though the late stable stage in half the time it took to move through the early stable phase.

Minority Predicting Downturn in Next 12 Months Holds Steady for Most Land Uses; Increases for Land, Retail, and Resort/Second Homes

The share of respondents predicting early downturn conditions this time next year held steady or declined for many land uses, with increases seen in only a few. Overall, those predicting downturn by midyear 2018 are still in the minority for all product types, with the highest share in the rental apartment market. This most pessimistic group did not see their share increase in most land uses, indicating that overall optimism for most product types is in line with where it was six months ago.

Multiple metrics and indicators suggest that we are in or nearing a “late stable” stage of the market cycle for most property types in most geographies. This is the stage in the cycle where supply begins to catch up with demand, and growth in income and property values begin to moderate. As the late stable phase of the cycle matures, the risk of reaching and passing peak real estate market conditions increases. In fact, multiple property types in some geographies (Washington, D.C.; Houston) and multifamily nationally appear to be near “peak” conditions at this time, though we have no reason to expect a sharp downturn.

The RCLCO “base case” scenario for real estate performance assumes these late stable conditions extend beyond 2017, and that the current expansion could continue for another 18 to 24 months, though the probability that unexpected events derail this trajectory continues to be high.

Our near-term (~12 month), high-level assessment of the U.S. real estate market is a continued march toward “peak” conditions:

On balance, we anticipate moderating, though still generally positive, operating and investment performance for the duration of 2017 and into 2018, resulting largely from a strong economy and healthy property market fundamentals.