Seattle Leads the Nation in Class A Apartment Rent Growth at 9.9%

Seattle saw impressive rent growth of 9.9%, the largest increase in year-over-year effective rent in Class A apartments in the nation’s largest markets. This robust gain follows outstanding growth at year-end 2015, when Seattle was ranked 2nd in the nation behind Portland. The Peerless City’s continued rise in rents is due to a variety of factors, including high-income job growth fueled by a burgeoning tech sector, total non-farm employment increasing by 3.6% over the last 12 months,[1] and delivery of new apartments that have struggled to keep pace with demand, at a least for now. Over 16,000 apartment units are proposed or under construction, and likely to deliver in the metro area by 2018. This represents over 4%[2] of the region’s rental apartment stock, well above the national average of about 2%[2]  for metro areas, indicating that a decline in the rate of growth may be a sign that the Seattle market is beginning to cool as the area becomes inundated with new supply.

The top three markets in the mid-year snapshot, the same top three from the 2015 year-end survey, saw annual increases in rent of more than 9%, over twice the national average of 4.2%. These markets averaged a growth rate of 9.7%, which is over 300 basis points lower than the 12.8% average of the top three markets in the 2015 year-end snap shot, an overall decline of almost 25%. National rent growth slowed over the same period from 4.6% to 4.2%, or approximately 10%, indicating that rent growth in the hottest markets is slowing at a faster rate than the national average. Still, this slight slowdown may just be a regression to the mean, as indicated by the mild dip in occupancy for all three markets. RCLCO anticipates that these three top markets will continue to experience strong growth well above the national average for the foreseeable future.

Over one-half of the top markets (12 in total) are relatively small and have Class A rents below the national average. Markets with a small population, such as Memphis (1.3 million), Raleigh (1.2 million), and Salt Lake City (1.1 million) are all near the bottom of the 50 largest metropolitan areas, with rents well below the national average, and yet they have some of the strongest rates of effective rent growth. RCLCO expects these smaller, non-traditional apartment markets to draw increased interest from investors looking to move out of more competitive, lower-yield areas in search of higher returns.

Surprise Swing from Providence Launches New Market into the Top 20

The market that made the biggest jump in the rankings since year-end 2015 was Providence, rising from 46th in the year-end 2015 snapshot to 10th place in this most recent survey. Rent growth in the market for previous quarters had been more or less flat, hovering around $1,850-$1,900 from Q4 2014 to Q4 2015. This anemic rate of rent growth was well below the national average of 4.7%, putting Providence near the bottom of large U.S. markets in the year-end 2015 snapshot. With no new deliveries of high-end apartment units since 2014, this jump in rent can be attributed exclusively to rent growth in existing Class A product. 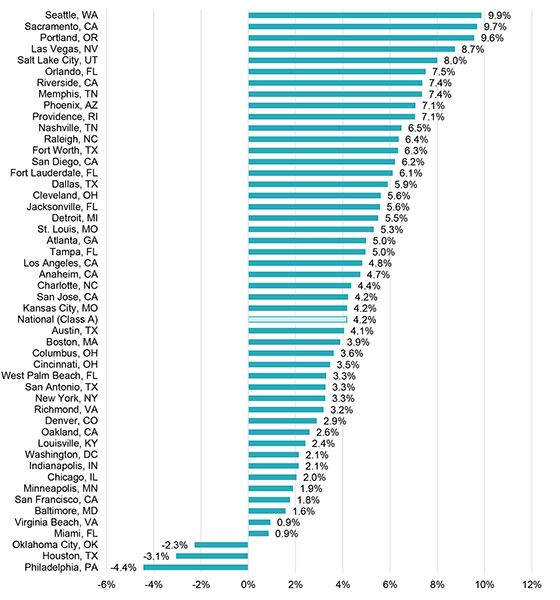