The arrival of a Whole Foods in a gentrifying area is commonly seen as an indicator that a neighborhood has “made it” and is often met with equal parts celebration and derision. Much like the presence of high-end yoga studios, chunky eyewear, or top-knot hairstyles, Whole Foods represents the changing face of a community—a bellwether of positive evolution or harbinger of displacement, depending on one’s perspective. Regardless, a new Whole Foods or Trader Joe’s is one more signal of the changing landscape of the nation’s urban centers.

The theoretical impact that the well-known grocer can have on a neighborhood, the so-called “Whole Foods Effect,” has, up until this point, been studied through a limited number of lenses. Previous investigations (and satirical takedowns) have focused on the qualitative impacts on the culture of a neighborhood, and any quantitative studies have been limited to the impacts of value of nearby land or for-sale homes. Questions about what effect the presence of a Whole Foods has on market-rate rents or, more importantly, the value of a real estate investment from the perspective of an owner or developer, have been left largely unanswered.

Recognizing this gap in research, RCLCO undertook the following study to better understand and document the impacts that a Whole Foods or Trader Joe’s on the ground floor has on the rental apartments above. This effort was positioned from the perspective of a real estate developer or investor and sought to answer the following key questions:

RCLCO conducted a peer group analysis using historical rental market data for over 50 apartment buildings in more than 10 different submarkets across the country to find out if the “Whole Foods effect” documented in for-sale housing would carry over into the rental apartment market. By comparing the performance of buildings with an on-site Whole Foods or Trader Joe’s to analogous new rental buildings in the same submarket and/or neighborhood, we isolated the impact of attracting a specialty grocer on a new rental apartment development.

Rental buildings with a Whole Foods or Trader Joe’s on the ground floor enjoy, on average, a rental premium of 3-4% above their nearest competitors after adjusting for key quantitative and qualitative differences. Whole Foods commands an average premium of 4.3%, which is higher than Trader Joe’s at 3.2%. 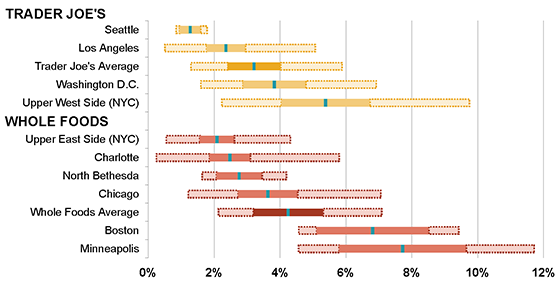 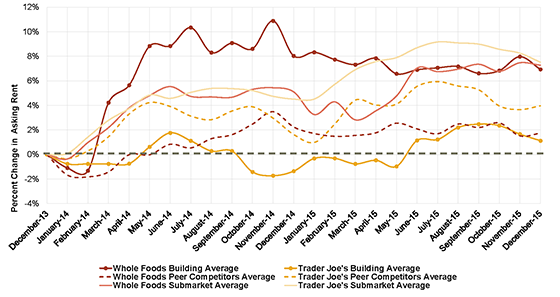 From year-end 2013 to year-end 2015, Whole Foods buildings saw average rental growth rates rise 6.9% over this 24 month period, which was slightly below the submarket average of 7.3% but well above their peer competitors (1.7%). By contrast, Trader Joe’s buildings saw an average rent growth of only 1.1%, compared with 4.0% for the peer communities in their submarket and 7.5% in the submarket as a whole. Once again, Whole Foods demonstrates a superior impact on rents compared with Trader Joe’s, which benefited from the initial rental premium but then did not outperform rental growth among their submarkets or peers.

These grocers are no guarantee of faster absorption, but perform at least on par with “fair share” expectations. 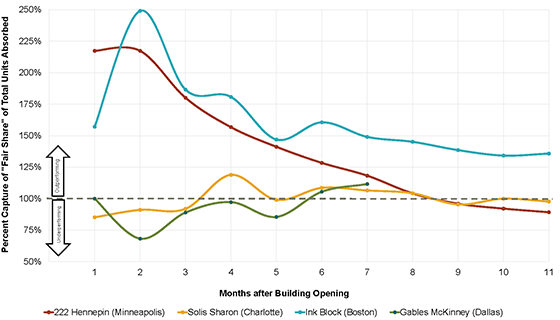 In two markets that were investigated, Minneapolis and Boston, the Whole Foods communities largely outperformed their expected capture rates, particularly during the first months of lease-up. Conversely, in both Dallas and Charlotte, these comparable new communities absorbed units more or less on pace with their “fair share” of total demand in that submarket.

The “Whole Foods Effect” Is Very Real and Very Valuable

Clearly, an on-site Whole Foods has a positive impact on rents and rental rate growth for the apartments located above the store. The effects on absorption pace are less consistent, but appear to improve the initial months of lease-up in certain markets. Trader Joe’s, while certainly demonstrating some net positive impact on asking rents, does not appear to have the same impact on rent growth. Even after documenting these current and historical positive impacts, questions remain about the longevity of this “Whole Foods Effect,” particularly as buildings age and markets become saturated with high-end grocery and food options. However, one thing is certain: a Whole Foods in a rental building, regardless of submarket, is a significant boon to rental rates, rent growth, and absorption pace.

In order to determine the rent premium that a ground floor Whole Foods or Trader Joe’s creates for a rental apartment community, RCLCO analyzed six Whole Foods buildings and four Trader Joe’s buildings across 10 different regions and submarkets. After selecting each case study, we then identified two nearby buildings within each submarket that were similar in terms of age, type of construction, level of finish, and overall amenity package. We collected the average gross rent and rent per square foot for a one-bedroom apartment for the month of February 2016. This average value ratio (on a PSF basis) was then adjusted to match the average size of a one-bedroom in the competitive set, and then further adjusted to control for other quantifiable differences between the peers, such as building age, Walk Score and Transit Score, and community and building finishes. The resulting adjusted rents were then compared to the average one-bedroom rent in the grocer-anchored case study building.

RCLCO further modified this adjusted difference in rents to account for intangible or unknown factors. For this analysis, we are only attributing 30-50% of this difference in adjusted rent per square foot to the presence of a grocer. This is a relatively conservative estimate, as the actual premium could be higher than what is presented here. However, the adjusted difference in rent could be ascribed to a myriad of intangible factors such as building management, consumer preference, or immediate site context, so we have adopted this conservative posture to control for those potentially meaningful but unknown factors.

For this component, RCLCO restricted the study to buildings that had at least 12 months of data available, which limited the dataset to four Whole Foods buildings and four Trader Joe’s buildings in eight different submarkets.

Using average rents as reported on a monthly basis, RCLCO looked at the 2013-2015 year-over-year rent growth of the selected case study buildings, and compared that rental rate growth to all buildings delivered within a year of the case study property in the same submarket and/or neighborhood, which may or may not include the competitive peer buildings used in the rental premium analysis. Their average rents were then indexed to a starting value of 100 based on December 2013 levels. The chart above demonstrates how the rents changed over the subsequent 24 months. 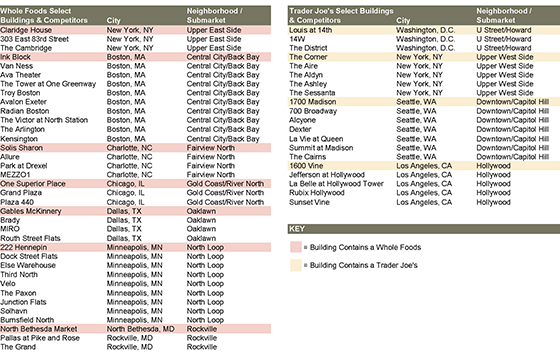