Communities on RCLCO’s 2019 Top-Selling Master-Planned Communities (MPC) List experienced total sales that were over 8.7% higher than the total sales in 2018. The Villages, with 2,429 home sales, is once again ranked as the top-selling community in the country. Sarasota, Florida’s Lakewood Ranch claimed the second overall spot, with Las Vegas’s Summerlin in the third-place position once again. Also in this issue, we recap the best-selling communities of the decade as we ring in both a new year and a new decade—one which is poised to present bountiful opportunities for MPC development as indicated by RCLCO consumer research, trending historical data, and interviews with RCLCO clients and colleagues. 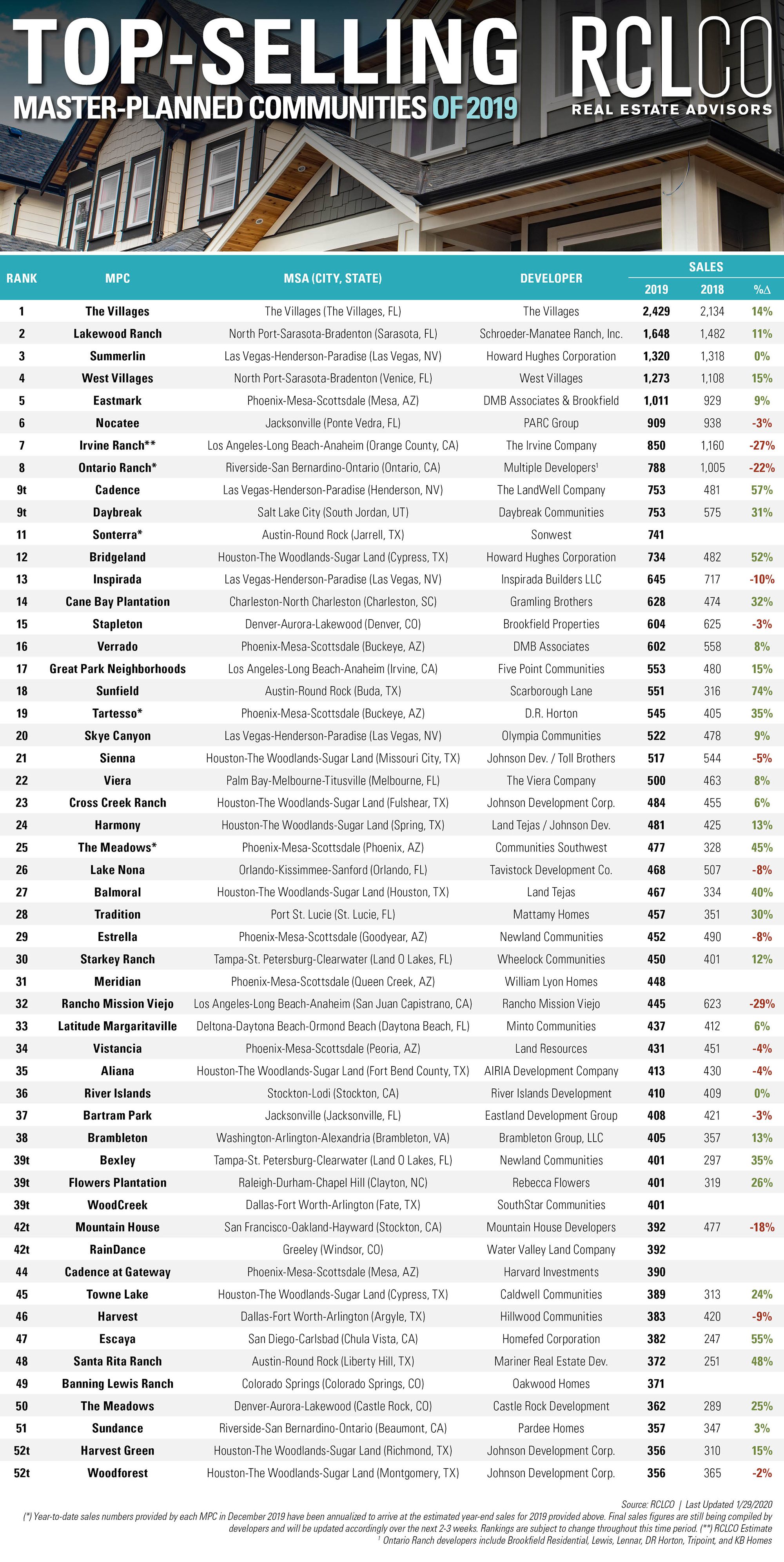 Every year since 1994, RCLCO has conducted a national survey identifying the top-selling master-planned communities (MPCs) through a rigorous search of high-performing communities in each state. For this 2019 report, we have surveyed MPCs throughout the country to establish the rankings following the release of “The Top-Selling Master-Planned Communities: Mid-Year Update 2019”. Also in this issue, RCLCO breaks down the best-selling MPCs of the decade and assesses the current state of the MPC market, which indicates a positive future as we enter a new decade. Indeed, consumer preference surveys, conversations with RCLCO clients and colleagues, and trending historical data all suggest that this decade could be a “roaring 20s” for MPC development.

The 2019 top-selling master-planned communities (MPC) list experienced total sales about 8.7% higher than 2018. The Villages, with 2,429 home sales, is once again ranked as the top-selling community in the country. Sarasota, Florida’s Lakewood Ranch claimed the second overall spot, with Las Vegas’s Summerlin in the third-place position once again.

Texas, Florida, and California account for 62% of total sales among the 50 top-selling communities, with the share of total sales in other states increasing from 34% to 38% since 2018. Florida continues to dominate the top five of the list, with The Villages, Lakewood Ranch, and West Villages in the first, second, and fourth spots, respectively. Nevada and Arizona each made significant strides in the rankings this year, representing 25% of top-50 sales combined and taking the third and fifth spots respectively with Las Vegas’s Summerlin and Mesa’s Eastmark. The average year-over-year growth of communities on this year’s list that were previously tracked last year is a whopping 14%!

The Phoenix-Mesa-Scottsdale, AZ MSA ranks as the top-selling metropolitan statistical area in terms of total sales, with eight MPCs totaling 4,356 sales. The Houston-The Woodlands-Sugar Land, TX MSA has 9 appearances within the Top-52 communities on this year’s list totaling 4,197 sales.

Best of the Decade

As we close out the year and commemorate a very successful 2019 for MPCs, it’s important to reflect on the last decade of master-planned community sales. The 2010s represented a difficult decade at the start, with real estate markets clawing their way out of the depths of the great recession. MPCs generally gained market share with the recession due to a flight to quality among both builders and consumers. Steady growth in total sales was experienced by many top-selling master-planned communities in this decade, and the 19 MPCs listed below deserve particular recognition for their spectacular performances during this time period.

The following rankings are based on appearances within the top-10 ranks of RCLCO’s top-selling MPC lists over the past decade, with many MPCs at the top of this list being similarly represented on the 2019 Top-Selling Master-Planned Communities rankings.

Florida’s The Villages is the top-selling master-planned community of the decade. With 10 appearances in RCLCO’s top-10 list over the last 10 years (and in the top spot for many of those years), this MPC showed extreme resilience even during the worst of the last recession. Although some had predicted that The Villages would be winding down residential sales by now, it’s going strong and off to a great start this decade.

Following closely behind The Villages are Sarasota’s Lakewood Ranch and Orange County, California’s Irvine Ranch. With nine appearances each, these communities are tied for the second-place spot for the decade. Jacksonville’s Nocatee and Denver’s Stapleton round out the top-5 list for the decade, with 8 and 6 appearances within the top-10 selling MPCs in the country, respectively.

State of the MPC Market and Outlook for a New Decade

RCLCO’s research indicates that there is strong demand for MPCs and that sales could be greater than has been demonstrated to date. In RCLCO’s “2018 Housing and Community Preference Survey,” RCLCO determined there was demand for a broader range of home types and sizes than is currently being provided by the industry. RCLCO’s consumer research among thousands of qualified potential new home buyers indicates that further diversification of new home types, sizes, and prices could substantially boost MPC market share. MPCs that have consistently achieved the highest sales credit their market segmentation strategies—the targeting of various age, income, and household segments with appropriately priced and designed residential product types and lifestyle amenities. RCLCO’s 2019 consumer preference survey further illustrates the importance of product and price segmentation to increase market share. The following graphs illustrate the critical nature of this product and price segmentation. 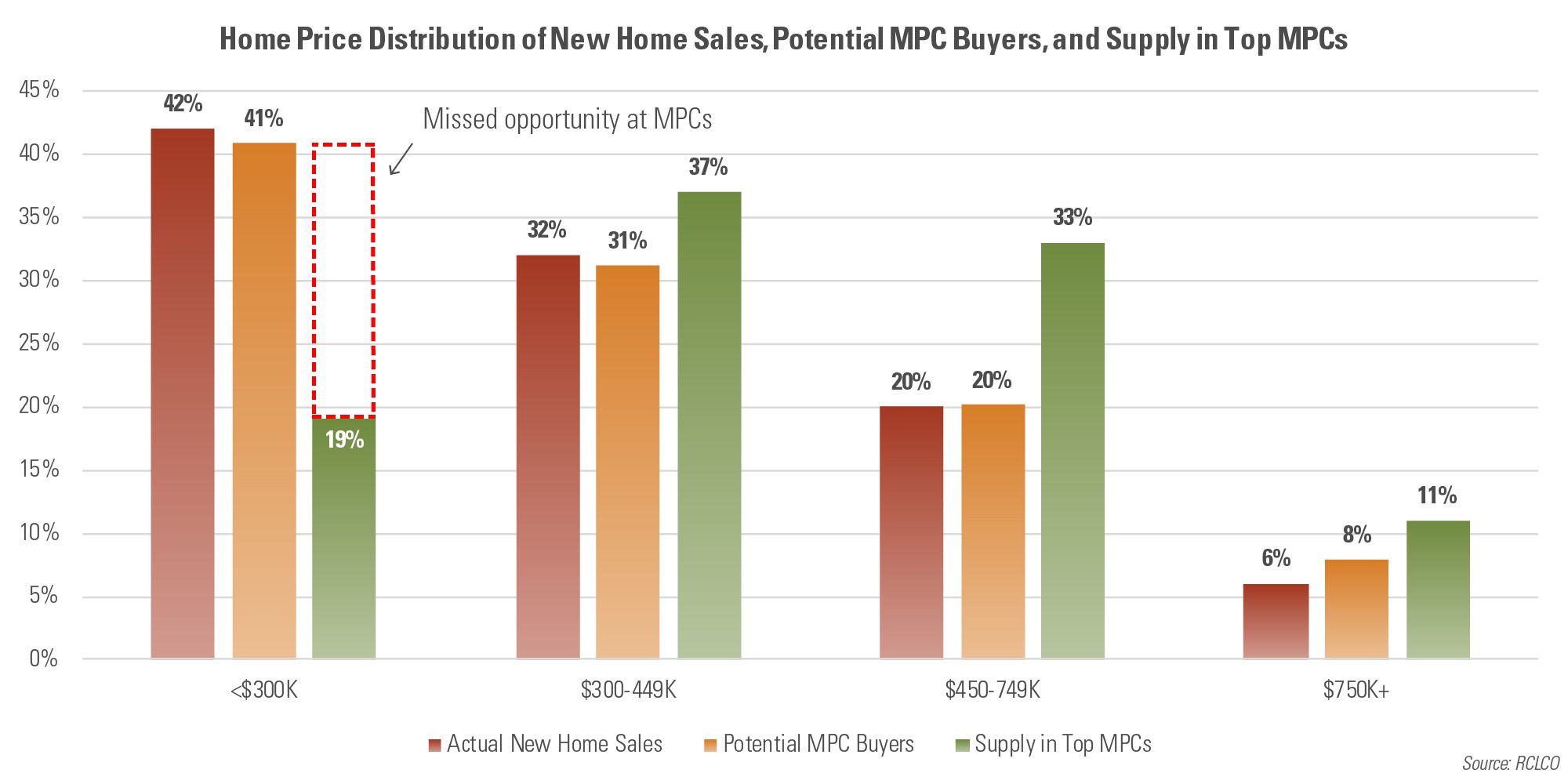 The top communities obviously do a great job of offering a broad range of new homes and neighborhoods, making them the best in the nation in terms of total annual sales. Nonetheless, demonstrated preference for MPC product by prospective buyers as compared with actual home sales shows that the supply of new product in top-selling MPCs currently undersupplies a significant portion of the market for new homes—those seeking housing under $300,000. Conversations with the top-selling communities in the country consistently highlight the need to capture buyers at these price points in order to expand market share and increase sales by providing additional points of sale. However, it’s not just about price; many consumers are also seeking smaller homes than are currently included in the mix at many communities. Part of the ability for certain MPCs to capture buyers at these price points is driven by the provision of a diversity of home types and sizes, including “missing middle” product types such as attached homes as well as smaller detached product. This home size discrepancy is further illustrated in the graph below. 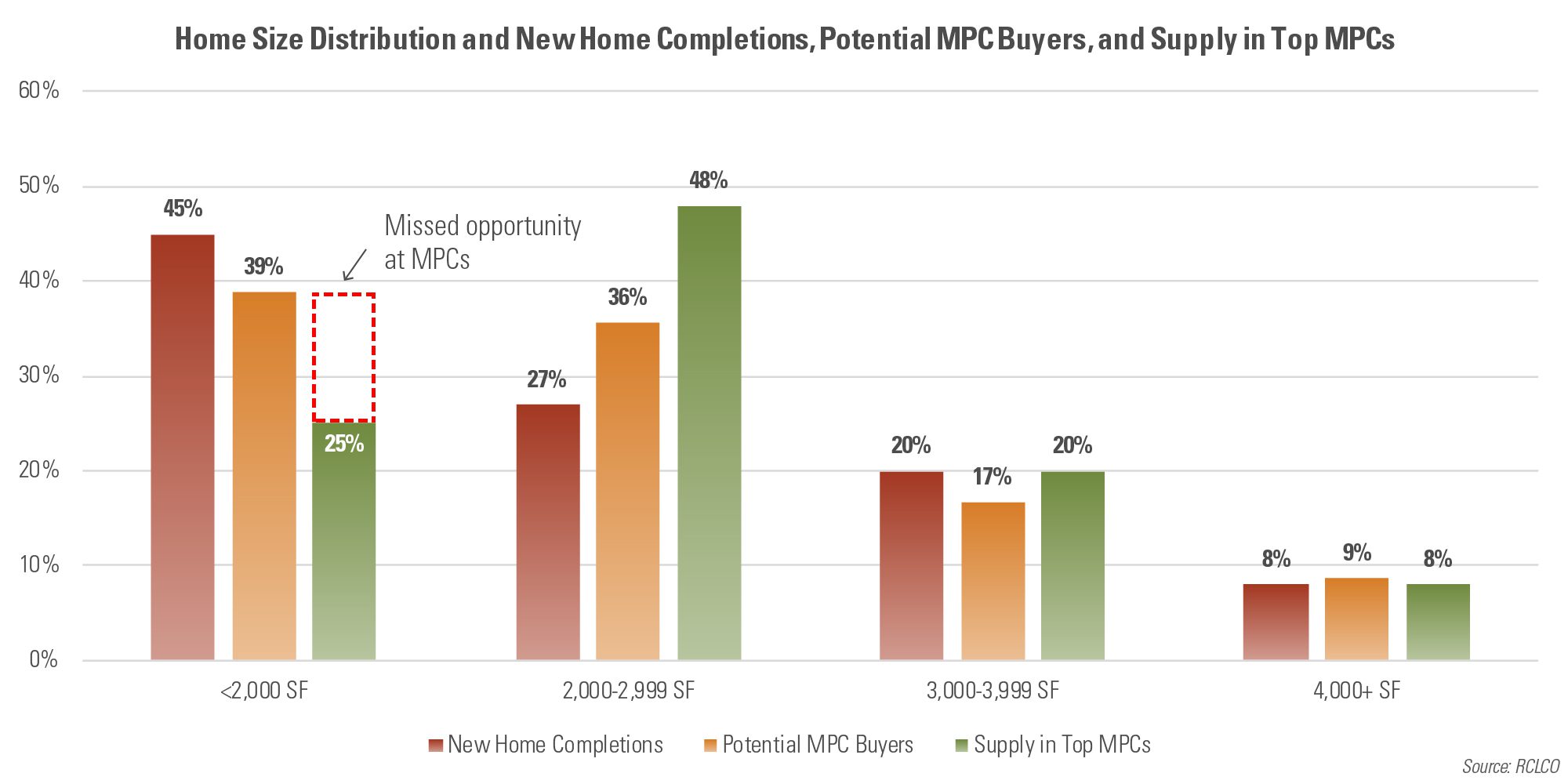 RCLCO’s survey indicates that nearly 40% of potential MPC buyers would like a home under 2,000 square feet. However, only 25% of MPC product falls in this range.

As we enter a new decade, an important question to consider is how the master-planned community market will perform moving forward. If trending historical data can be used as indication, the market for this product type is strong and growing, as represented by the top-10 MPC sales over the last decade shown below. 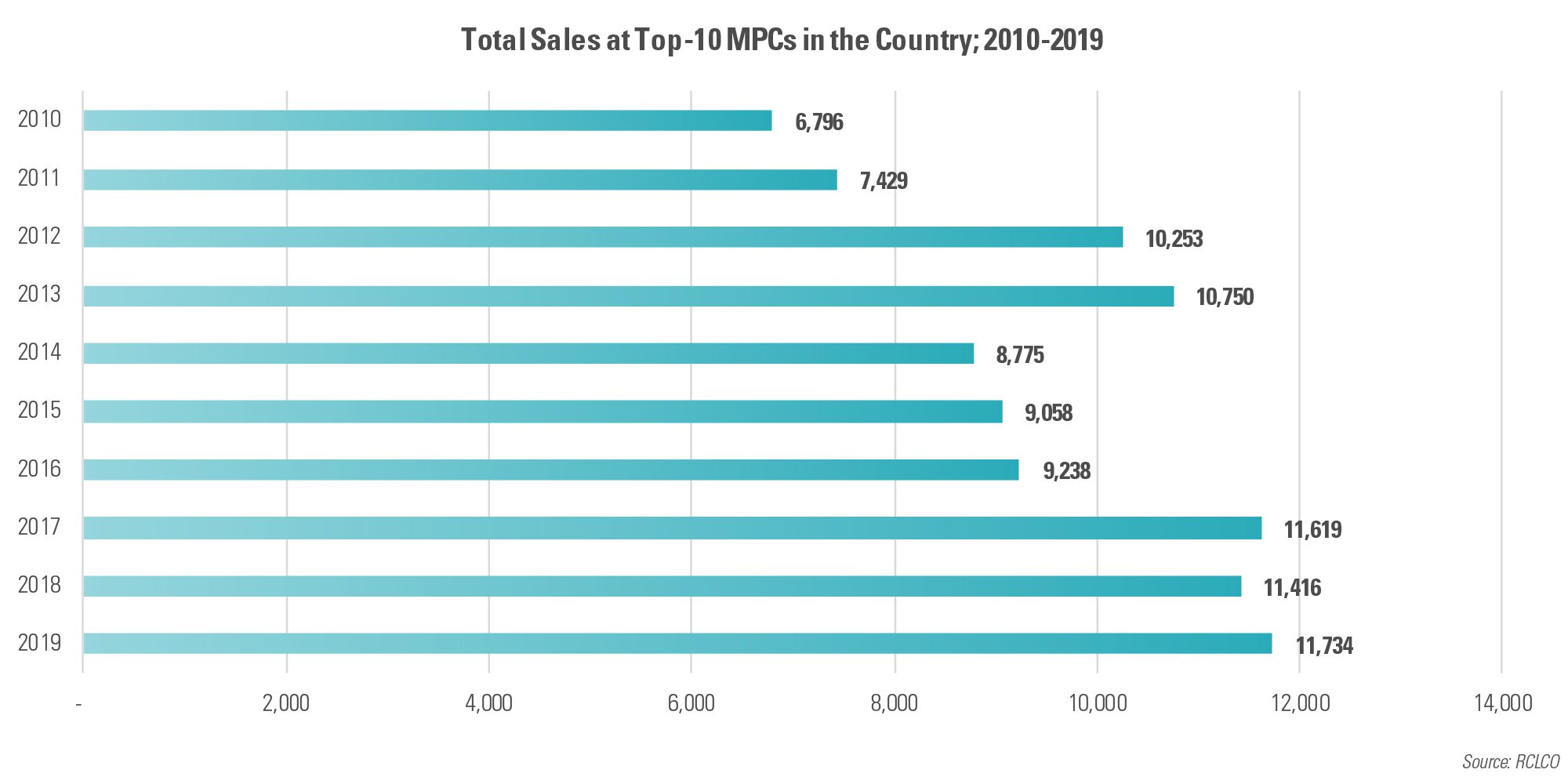 Over the course of the past decade, total sales within the top-10 selling MPCs in the country have increased by 73%, from a 2010 low of 6,796 to an estimated 11,734 sales in 2019 (subject to slight changes as final sales numbers are provided by communities). This data suggests that the market for master-planned product is strong and growing, with positive implications as we enter a new decade.

The future of growth of the MPC market is tied to their ability to deliver an even more diverse range of new home product, prices, and sizes. The market for MPC living is greater than currently being achieved, and while that strong demand provides opportunities to command premium pricing, it also indicates opportunities to expand market share. To the extent that developers are able to execute increasingly diverse segmentation strategies, RCLCO believes that there is reason to be optimistic about the market for master-planned communities over the rest of this decade. 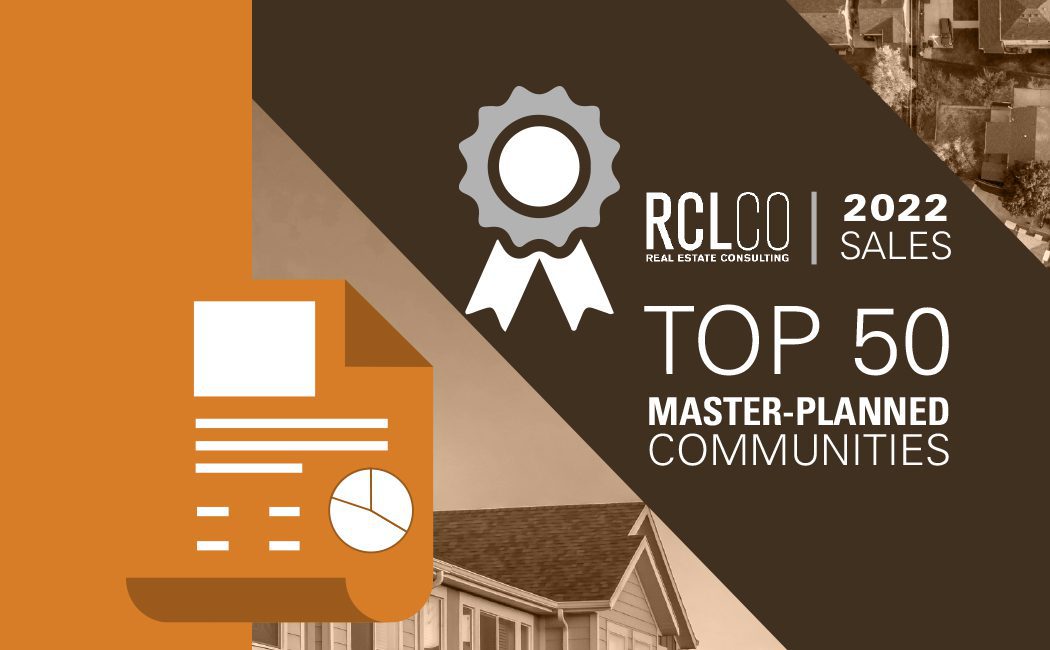 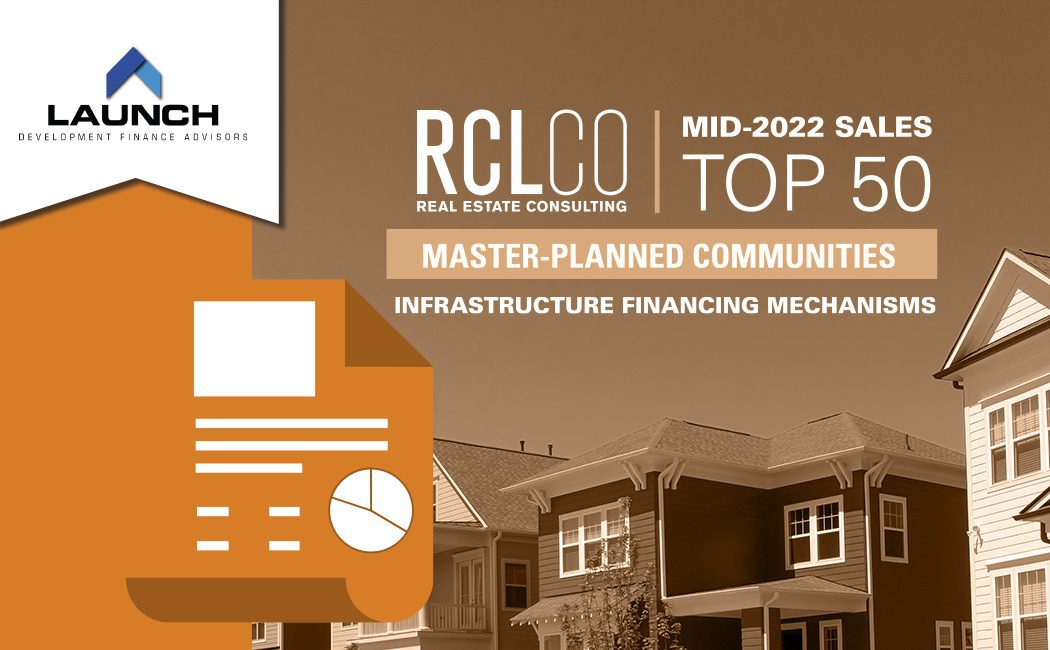 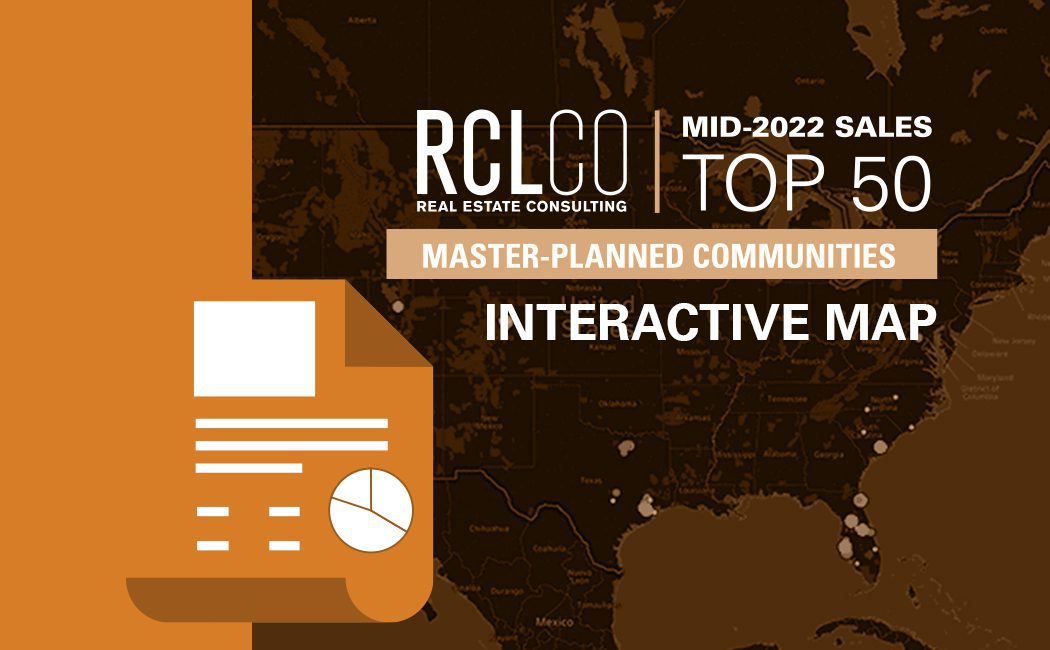 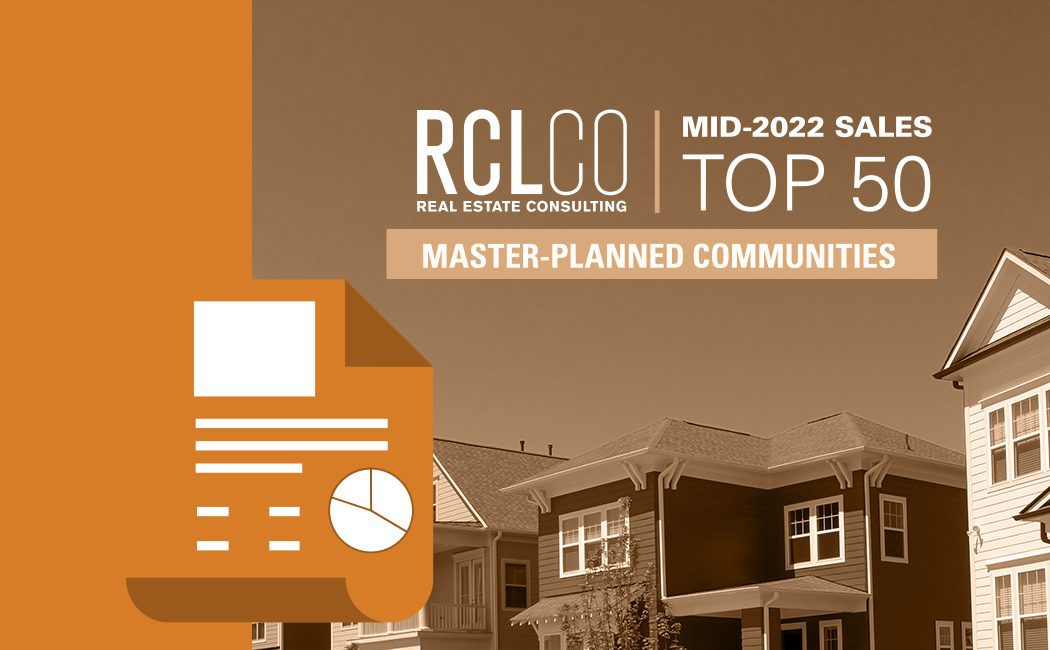 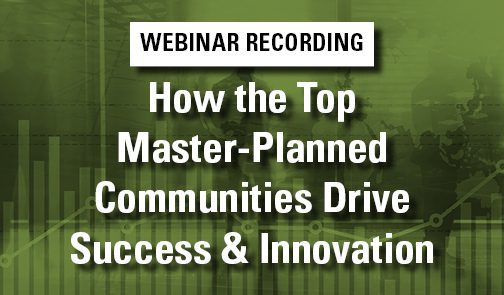 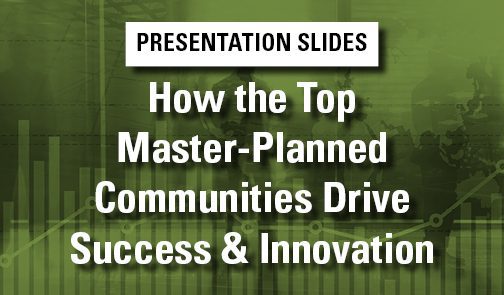 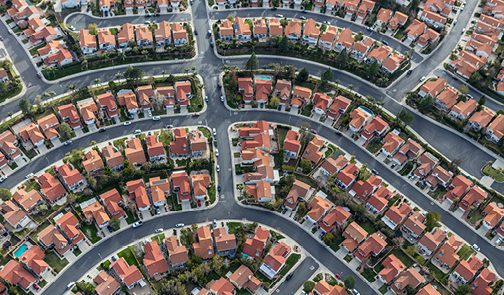 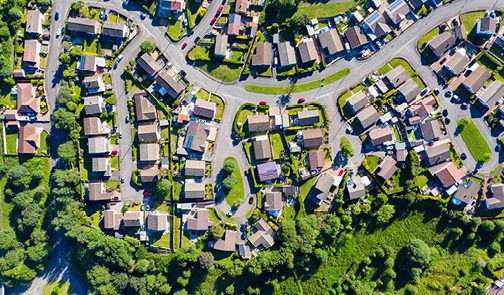 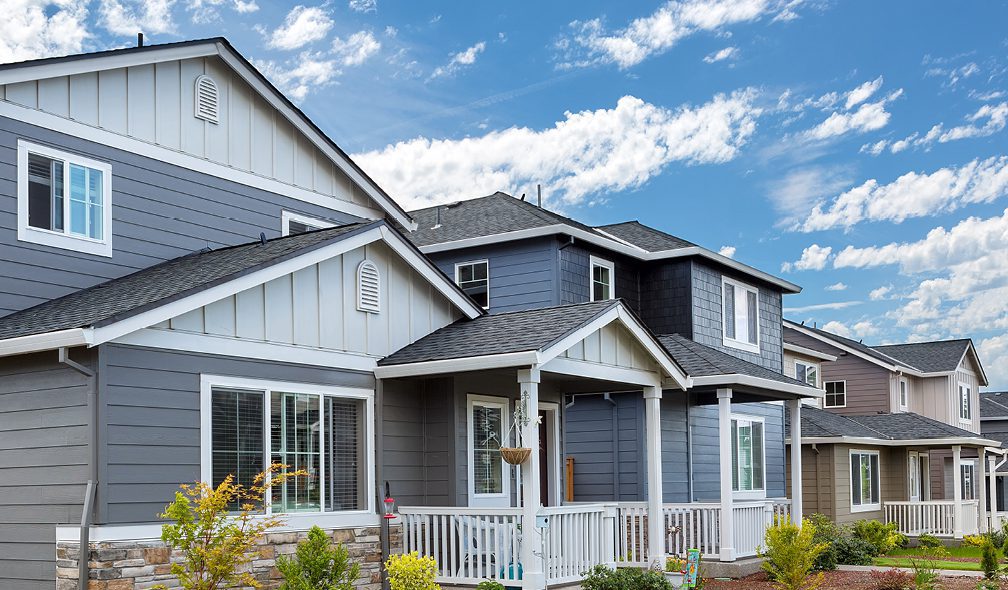 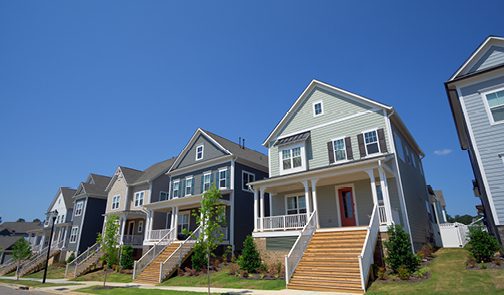