From the Super Bowl to the Olympics, sporting events attract hundreds of millions of people each year.[1] Just as importantly, however, the venues that host these events are often cultural and economic backbones of the communities in which they are located. In American cities with MLB teams, an average of 30,000 fans flock to stadiums on game days,[2] bringing with them increased retail spending and a contagious sense of excitement that can lead to the creation or regeneration of entire neighborhoods.

Nevertheless, much of the discussion about the impact of sports venues is too binary to reflect the full range of benefits that large-scale facilities can bring, or not focused enough on the more significant impact that the emergence of true mixed-use sports districts can bring.

All too often, cities and counties considering sports venues ask themselves the following: How much will it cost, and how much tax revenue will I get from the venue itself? However, these questions do not address many of the reasons why these venues are so valuable in the first place. In addition to generating tax dollars on ticket, concession, and merchandise sales, sports venues help create dynamic, mixed-use environments that yield tremendous economic dividends, community benefits, and real estate opportunities—impacts that extend far beyond the typical tax revenue analysis. 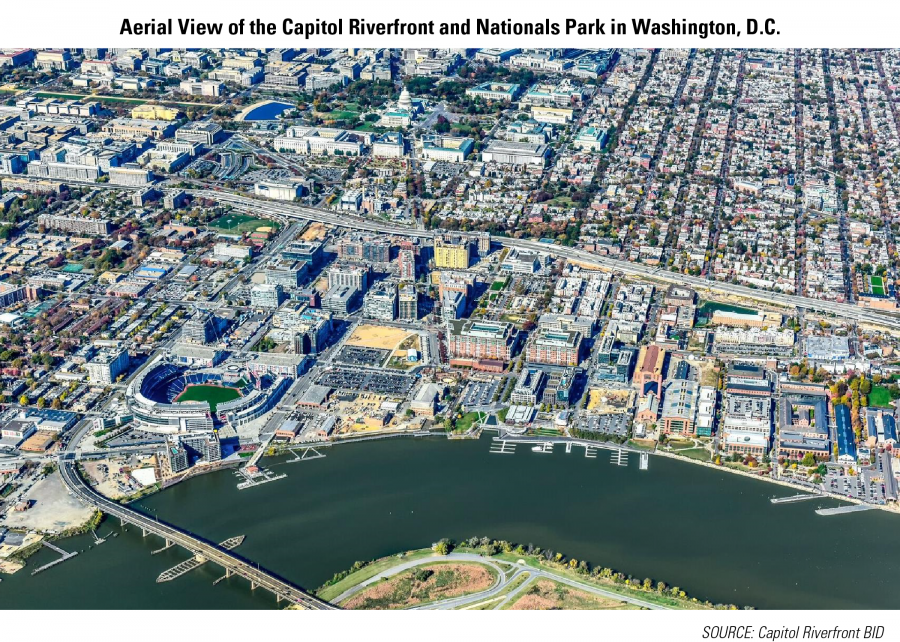 A Case Study of Nationals Park

Nationals Park in Washington, D.C., demonstrates why tax revenues are the wrong measure. Yes, the District developed a creative bond-financing package that, by most estimates, will be paid off 10 years ahead of schedule due to revenues from the ballpark. But, this estimate does not reflect the full range of benefits that the ballpark offers. Along with vision from the Capitol Riverfront Business Improvement District (“BID”) and public investment in parks, trails, transit, and affordable housing, the development of Nationals Park leveraged billions of dollars in private investments, creating a whole new neighborhood on former parking lots and excess federal property. Known locally as the Capitol Riverfront, this new neighborhood provides citizens from across the region with a vibrant, unifying place to cheer on their favorite sports team. 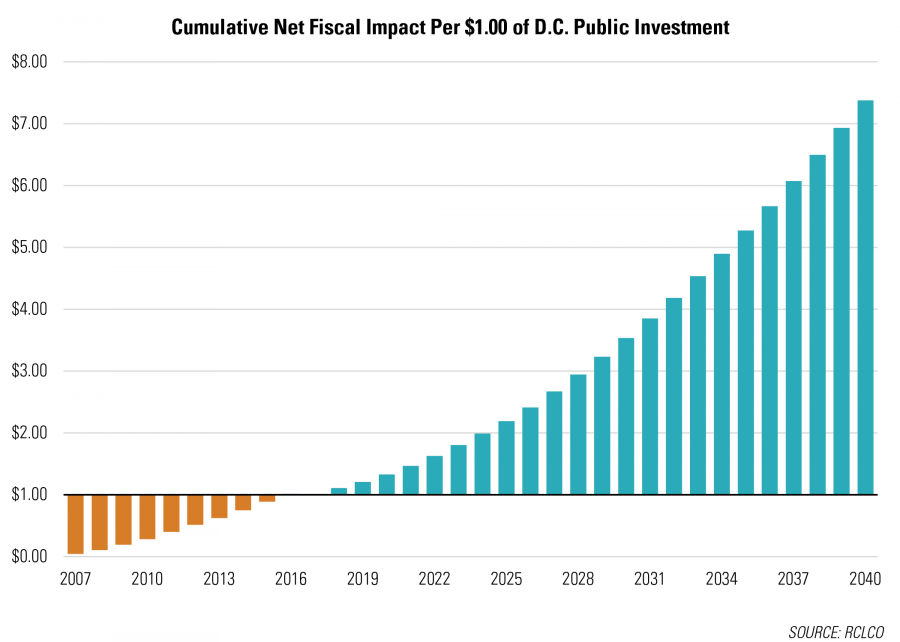 What Does This Mean for Me?

The physical and economic transformation of the Capitol Riverfront highlights a key principle of economic development: through public investment, municipalities can leverage significant private reinvestment and help fuel the creation of new housing, office, retail, hospitality, and entertainment. Far from the exception to this rule, the Capitol Riverfront is one of many examples that show how sports venues can serve as a backbone of neighborhood regeneration. Home to the Blue Jackets, the Nationwide Arena facilitated a similar transformation in the mixed-use Arena District of Columbus, Ohio. Similarly, the Sprint Center helped Kansas City, Missouri, renew interest in its downtown by anchoring its vibrant Power & Light District.

In such places as Washington, Columbus, and Kansas City, sports venues serve as critical components of dynamic, mixed-use neighborhoods, benefitting a variety of stakeholders:

As demonstrated in the Capitol Riverfront, public investment has a wide range of beneficiaries. In just over a decade, the neighborhood tripled its net fiscal impact to the District, reintroduced residents to their riverfront, and created a lively environment that attracts three million visitors annually.[3] In addition to being locally significant, these impacts point to an exciting new trend in real estate. Across the country, places like the Capitol Riverfront are forming the playbook for how to create or reinvigorate entire neighborhoods using sports venues. While Washington, Columbus, and Kansas City are just three examples of places where this trend is occurring, they are setting the stage for other cities and landowners to get the ball rolling as well.