Headlines from this article:

Over the past few years, RCLCO Sentiment Surveys had indicated continued confidence in real estate market conditions. The mid-year 2020 results highlighted the speed and intensity of the economic downturn sparked by COVID-19 with a significantly more pessimistic outlook than usual. The YE 2020 result is still much lower than previous years but demonstrates an increasingly optimistic outlook as the economy and real estate markets enter a new year and head toward recovery.

Perhaps not surprisingly, sentiment about the health of the economy and real estate markets was significantly more positive at the end of 2020 than mid-2020 in the midst of the pandemic and before vaccines started rolling out when the index fell to the lowest level (current RMI = 9.2) since RCLCO began recording the index at the end of the Great Financial Crisis. The precipitous drop earlier this year reflected the disarray of the markets and economy in reaction to the global pandemic. Since the mid-year survey, the RMI index increased from its nadir to 31.6, which is right about at the recession-level benchmark. While this RMI is the second-lowest that RCLCO has ever recorded, the quick and sharp rebound mirrors the sharp, but still, only partial rebound in the economy experienced in Q3 2020, and demonstrates that the market in 2020 did not perform as poorly as had been predicted by our survey respondents at the time and that respondents are increasingly optimistic that markets will return to a “new normal” sometime over the next 12 months.

This sense of optimism is reflected in the future RMI of 68.2 presaged by the survey respondents over the next 12 months, which is typically a value that is indicative of strong market conditions. This forward outlook is among the most optimistic recorded since year-end 2015.

How Would You Rate National Real Estate Market Conditions Today Compared With One Year Ago?

Approximately two-thirds (67%) of respondents indicated that national real estate conditions were moderately or significantly worse when compared with one year ago. This is a marked improvement from the nearly 90% of respondents who claimed worsened conditions in Mid-2020, but does signal that conditions are getting better.

While the current sentiment regarding market conditions remains quite negative, the outlook for the upcoming year is extremely positive. Approximately 60% of respondents predicted that national real estate market conditions would be “moderately” or “significantly” better in the next year. This is a 180-degree reversal of the results from the mid-year survey when 59% of respondents predicted that the market would be “moderately” or “significantly” worse in the next year.

No Clear Consensus on the Impact of a Biden Presidency

Respondents were divided on how President-Elect Biden would affect real estate markets with the plurality (39%) responding neutral. Respondents who believed the President-Elect would have a negative effect cited increased taxes and regulation as impediments, whereas respondents who believed the President-Elect would have a positive effect cited increased predictability, stability, and a strong COVID-19 response. Since this survey was conducted before the results of the Georgia Senate elections, many neutral and unclear responses mentioned that congressional gridlock and Republican control of the Senate were likely to negatively affect Biden’s efficacy.

President-Elect Impact on Real Estate Markets in the Next Year

Fewer Product Types in Downturn over the Past Six Months

In the mid-year and year-end 2020 surveys, RCLCO captured a snapshot of where respondents thought each major real estate sector was on the real estate cycle. Compared to the June 2020 survey when many real estate “food groups” were still in decline, respondents told us that by December 2020 every major sector had hit bottom, and many were recovery. Retail and hospitality have both shifted towards the bottom of the market cycle, and more respondents expect each of these sectors to move to early recovery a year from now compared to the survey just six months ago. Since June, hospitality has supplanted retail as the sector with the worst conditions (downturn + bottom), likely due to the relatively strong performance of the grocery/necessity subsector boosting the overall sentiment of retail. The industrial sector continues to be a bright spot in real estate with only 7% of respondents stating that it was in a downturn or at the bottom of the cycle compared to 16% in the previous survey. 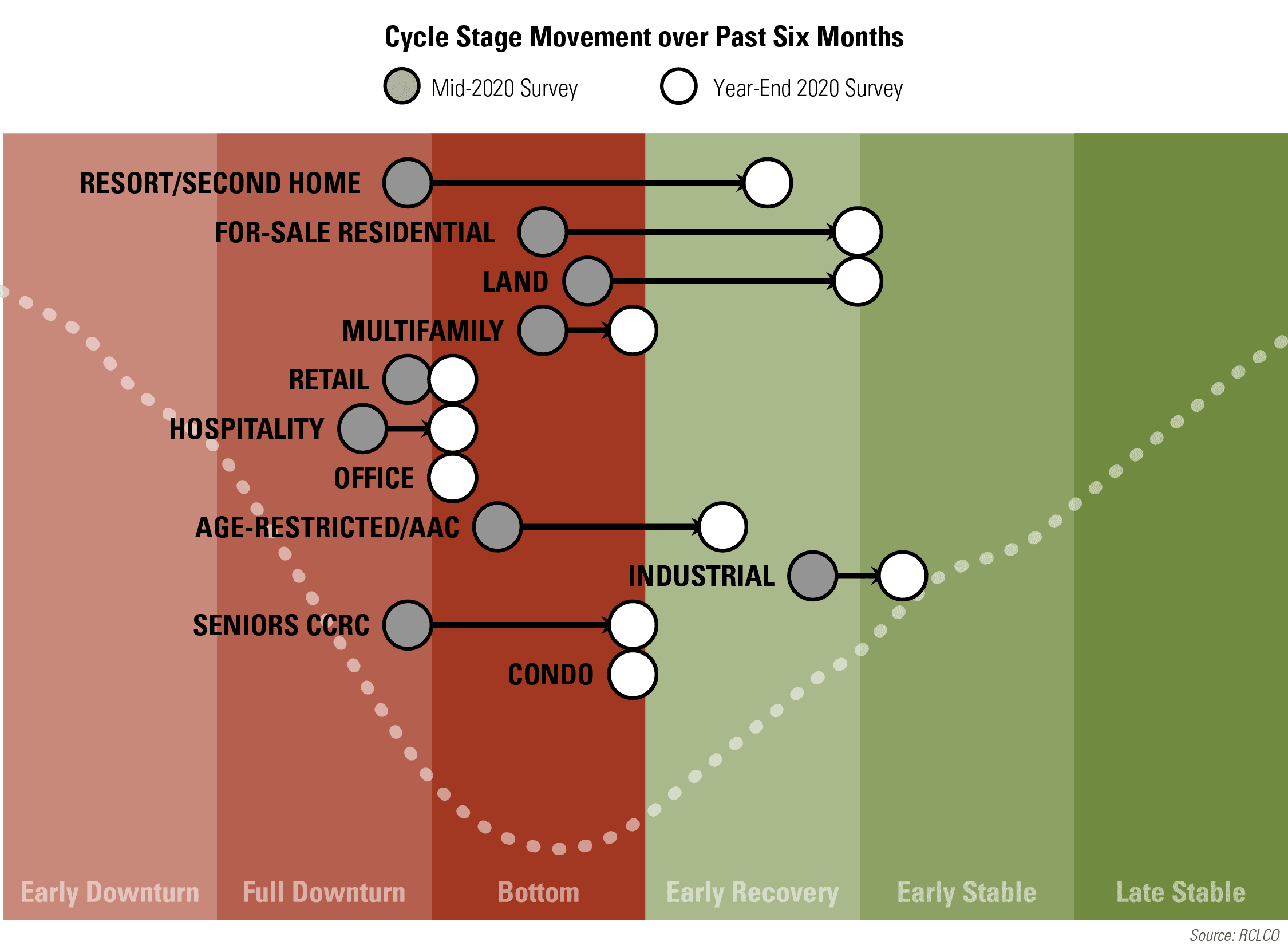 Survey respondents believed that most of the major real estate sectors moved from contraction to expansion in the second half of 2020. The industrial sector continued its exceptionally strong performance due to increasing e-commerce penetration and home delivery surges throughout the year. Retail and hospitality moved from full downturn to bottom, while office remained at the bottom. All of these sectors were the hardest hit by COVID-19 shutdowns, stay-at-home orders, travel restrictions, and increased teleworking. Within these sectors, there were occasional bright spots – for example, more than 75% of respondents categorizing Medical Office and Grocery-Anchored Community/Neighborhood Centers in the healthy recovery phase of the cycle.

Continuing Recovery for Most Product Types in the Upcoming Year 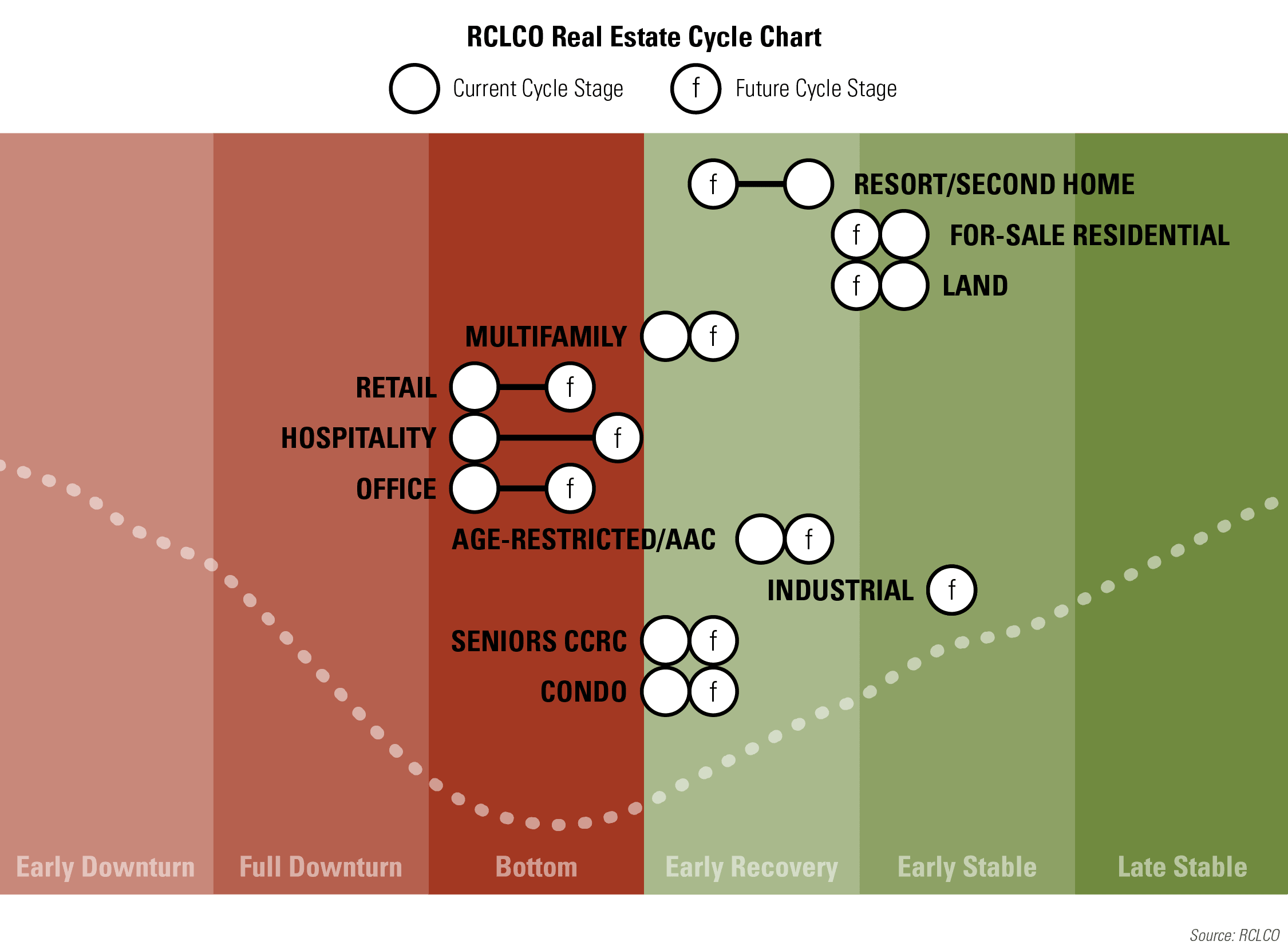 Looking forward, retail, hospitality, and office are expected to remain at the bottom for the next 12 months, as the nation slowly approaches herd immunity, and consumer confidence returns enabling the economy to become more fully engaged. For-sale residential and land outperformed significantly in the downturn as buyers took advantage of historically low mortgage interest rates and were looking for more space; and true to form, nearly half of all respondents pegged these sectors to be in the Late Stable stage, indicative of healthy market conditions.

Some Pandemic Trends are Here for the Long-Term

The current RCLCO baseline scenario for the U.S. economy resembles the “Swoosh” shaped recovery first identified by our firm as the most likely trajectory back in Q2 2020. True to this scenario, the U.S. economy staged a robust recovery in Q3 2020 as states began re-opening, but the pace of recovery in the labor market began to stall in November and December as a second wave of COVID-19 infections, hospitalizations, and deaths began to rise, and in fact, eclipse the pace seen early on in the pandemic, and the country began to rescind restrictions, albeit in an inconsistent patchwork way. 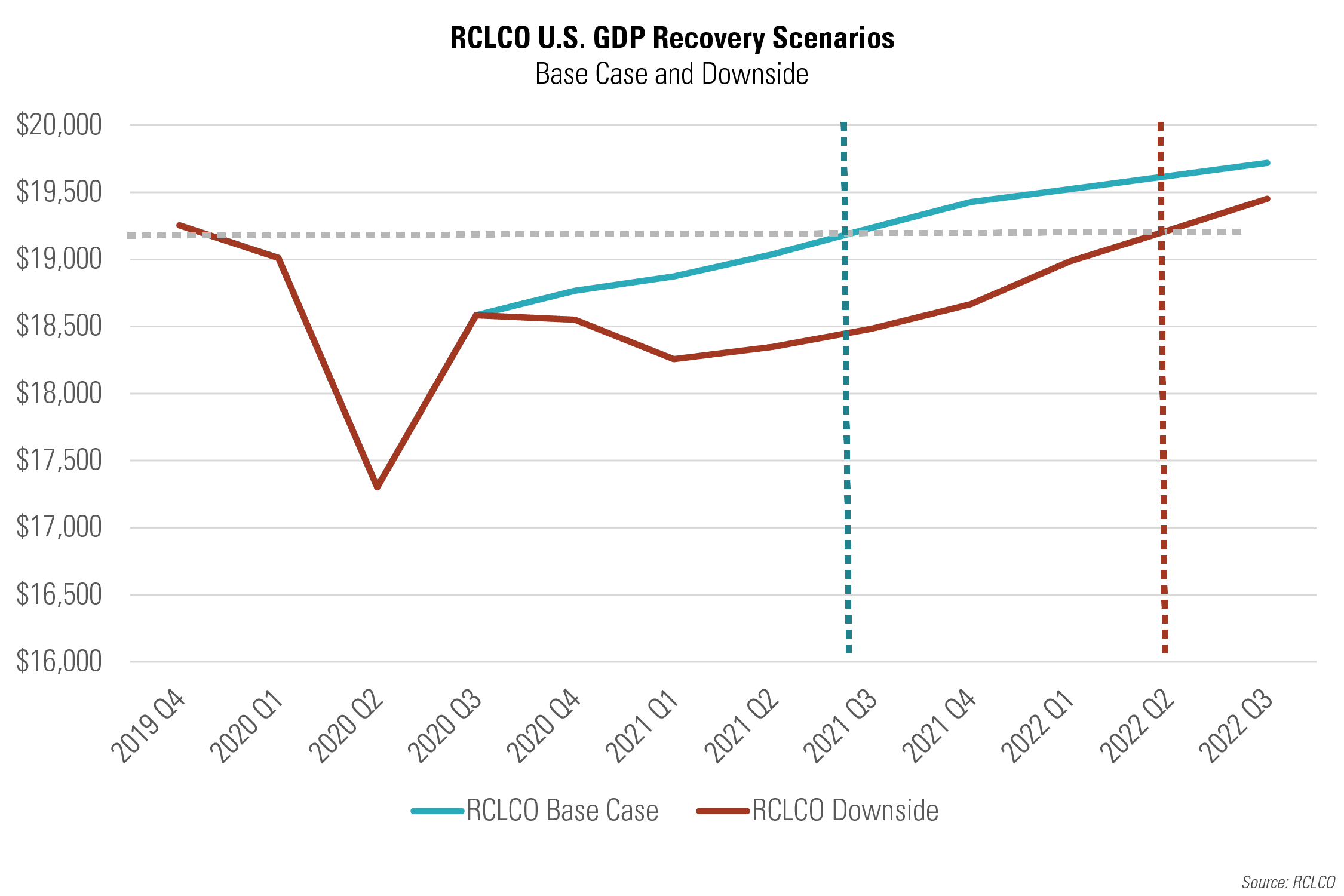 With two vaccines now approved (and more in the pipeline), and with distribution ramping up in the U.S., the baseline scenario assumes that sufficient adoption (even if short of herd immunity) will occur by the end of Q3 or the beginning of Q4 2021 that will enable consumers to more fully engage in the economy and allow the country to return to as close to a “new normal” as possible. Under this scenario, unemployment will continue to decline to an equilibrium rate closer to 4%-5%, and the U.S. economy will once again reach Q4 2019 GDP levels by the H1 of 2022.

Having said this, the term “K-Shaped” recovery has been widely adopted as a way to describe the fact that there are really two separate (and not particularly equal) economies in the U.S., with white-collar high-wage work-from-anywhere (WFA) workers experiencing little, if any, stress, and lower-wage essential and service workers continuing to be under considerable distress as it takes time for the retail, restaurant, travel/leisure/entertainment, and services sectors to fully recover. Many states are now shifting the vaccine priority to those >65, and so this low-wage sector of the labor force will likely continue to struggle until more widespread adoption is available and administered.

Given the uncertainty around full rollout and adoption of the vaccines, and possible mutations of the virus that could change the perception or reality of herd immunity, there is a possibility that the stalling of the recovery experienced in the latter half of Q4 2020 could extend, or even further erode, the recovery. In this Downside case, the economy would not reach pre-COVID levels of activity until Q2 2022, or beyond.

RCLCO’s Market Sentiment Survey tracks the sentiments of a highly experienced pool of real estate professionals from across the country and across the industry. Approximately two-thirds (72%) of respondents have worked in the real estate industry for 20 years or more, and 85% of respondents are C-suite or senior executives in their organizations.

Developers and builders comprise the largest share of respondents, at 41% of the sample. Another 22% are investors or capital allocators, followed by 7% in design or architecture firms. The remaining 37% of respondents come from a variety of other types of organizations within the real estate industry and public sector.